The coronavirus may cause fat cells to miscommunicate, leading to diabetes

Mississippi’s seven-day average of new COVID-19 cases continues to climb toward numbers seen in this summer’s surge. Thursday, the Mississippi State Department of Health reported nearly 1,400 new cases. A steep rise in hospitalizations is accompanying the rise in new cases, threatening once again to overwhelm the state’s health care system.

The Magnolia State is certainly not alone in this new surge of cases and hospitalizations, which is being followed by a rise in deaths. The U.S. has officially reached a new and devastating milestone in the history of the pandemic, reporting more than 250,000 deaths since the start of the crisis. The cumulative number of U.S. cases is now well over 11 million, with an average of nearly 163,000 cases added daily. In all instances — cases, hospitalizations and deaths — the U.S. leads the world.

In Warren County, MSDH reported 11 new COVID-19 cases Thursday and no new deaths. The cumulative number of cases in the county to date is 1,681, and the county’s death toll is 56.

Statewide, MSDH reported 1,395 new COVID-19 cases Thursday, bringing the total cumulative confirmed cases in Mississippi to 138,791. The seven-day average of new cases is 1,161 per day, about 395 cases higher than the seven-day average a month ago, and on par with numbers in late July and early August.

Of the 19 deaths MSDH reported Thursday, 18 occurred between Nov. 13 and Nov. 18 in the following counties:

One additional COVID-19 related death occurred Oct. 1 in Tippah County and was identified from a death certificate report.

New cases and deaths were reported to MSDH as of 6 p.m. Wednesday, Nov. 18. MSDH usually reports statistics on the COVID-19 coronavirus each day based on the previous day’s testing and death reports.

The primary metric concerning state health officials are the numbers of people hospitalized, and that number rose steadily with the rise of new cases in July and August. On June 6, the number of Mississippians hospitalized with confirmed cases of COVID-19 was at 358. Hospitalizations tripled by late July.

Hospitalizations then steadily dropped through Oct. 3 when they began rising again along with increased cases. The last week in October, hospitalizations began levelling off; however, since Nov. 4 hospitals have seen a steady rise in COVID-19 patients once again.

The number of Mississippians hospitalized for the virus as of 6 p.m. Tuesday, Nov. 17, was 948, nearly 80% of the late July peak of about 1,200. The number includes 821 with confirmed cases of COVID-19 and 127 people with suspected but unconfirmed cases. Of those with confirmed infections, 207 were critically ill and in intensive care units and 96 were on ventilators. 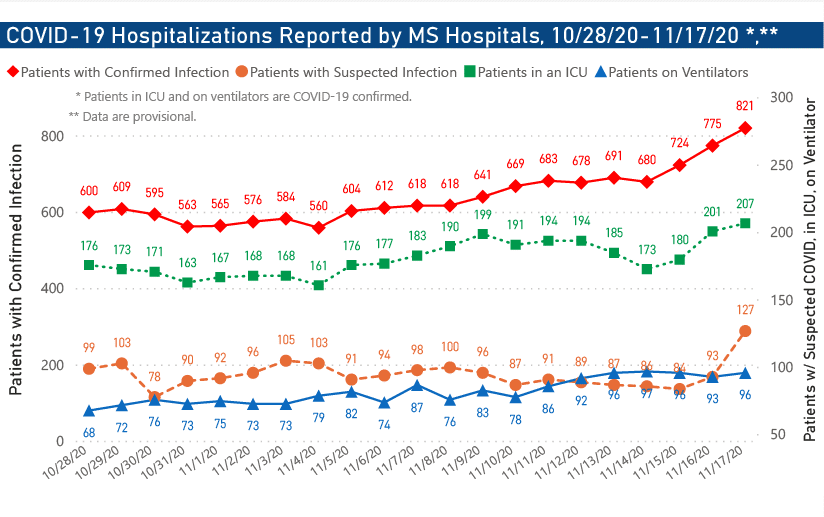 MSDH has estimated the number of people who can be presumed recovered from COVID-19 in Mississippi. That number is 116,683 through Sunday, Nov. 15. It represents about 84.1% of the cumulative 138,791 cases reported as of Thursday, Nov. 19.

The number of cases in Warren County three weeks ago, Thursday, Oct. 29, was 1,566, therefore the estimated number of people presumed recovered in the county is 1,510, or about 89.8% of the 1,681 cumulative cases reported as of Thursday, Nov. 19. The county has an estimated 115 active cases.

These estimates are based on MSDH’s guidelines for calculating estimated recoveries when hospitalizations are not known, using the number of cases 21 days ago, less known outcomes (deaths).

The total number of Mississippians tested for COVID-19 (PCR and antigen tests identifying current infections) as of Saturday, Nov. 14, is 1,165,593 or about 39.2% of the state’s 2.976 million residents. MSDH reports statewide test results once a week. Without daily updated numbers of tests, it is impossible to accurately calculate Mississippi’s positivity rate (positive results to tests, seven-day average); however, the rate was 19.5% Wednesday, according to Johns Hopkins University. The national rate is 10%, and 5% or lower indicates adequate testing.

A total of 26 deaths in Warren County were residents of LTC facilities.

MSDH is no longer reporting outbreaks in individual long-term care facilities in Mississippi and has replaced it with access to a database from the Centers for Medicare and Medicaid. You can access and search the data by provider here. The latest data available is for the week ending Nov. 1.

See a typo? Report it here.
Related Topics:COVID-19 coronavirusFeatured
Up Next