Mississippi Attorney General Lynn Fitch has announced the sentencing of three child predators across the state of Mississippi. Walter David Woodard, Robert Donald Ehrhardt, III and William Dale Scrimshire were each sentenced after being investigated and prosecuted by the Cyber Crime Division. 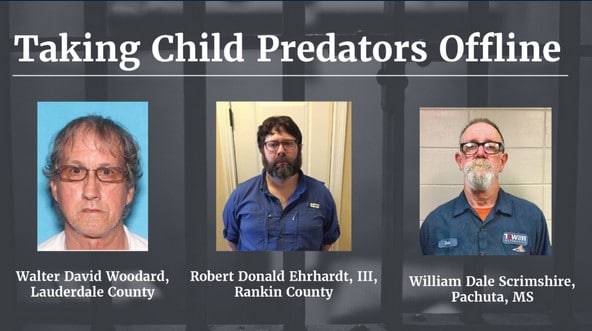 Woodard was sentenced on August 12 by Lauderdale County Circuit Judge Charles Wright. Woodard was already registered as a sex offender and was found guilty of two counts of exploitation of a child. This is his second offense.

Woodard is to serve 20 years without the possibility of parole and pay court costs, including $3,000 in fees and assessments.

Ehrhardt was sentenced by Rankin County Circuit Judge Brad Mills on September 7. Ehrhardt was found guilty by jury on five counts of exploitation of a child, which included possession of child sexual abuse material.

The case began with reports from the National Center for Missing and Exploited Children (MCMEC). 28 reports were given to CyberTipline Reports, which state an individual had uploaded images involving sexual abuse of children from a Skype account.

Judge Mills sentenced Ehrhardt to 20 years, pay $25,000 in fines and court costs and register as a sex offender.

Judge Wright sentenced Scrimshire to 40 years in the custody of the Mississippi Department of Corrections, with 8 years to serve and 5 years of probation after release. He will not be eligible for parole and have to pay court costs and fees of $3,000 and register as a sex offender.

When a child is sexually abused and the image of that abuse is shared with others, they are victimized over and over again, every time that image or video is seen by another child predator. And, studies demonstrate that those who view child sexual abuse material online have a high likelihood of committing a hands-on offense against a child, as well. When we take child predators offline, we are not only keeping victims from repeatedly reliving their trauma, we are stopping predators from finding new victims.
-The General Insider (Volume 42, September 9, 2021)
See a typo? Report it here.
Related Topics:
Up Next

Remains of missing Mississippi teen discovered over a decade later