The Event Place closed after downtown brawl and shots fired

Vicksburg woman given $5,000 bond for false reporting of crime, embezzlement

Vicksburg teen being sought in connection to armed robbery

The call originally came in reporting a huge fight in the 1400 block of Washington Street last night, Aug. 24, around 10:40 p.m. Several officers responded, and within five minutes four marked Vicksburg Police patrol cars were on the scene.

The Vicksburg Daily News arrived there just before the patrol cars and heard five shots fired in the vicinity. We observed dozens of young people running away from the scene in all directions. Other eyewitnesses stated that there were people running everywhere. 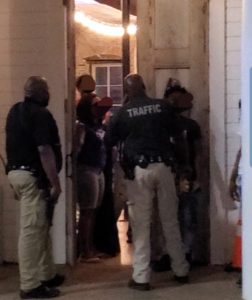 Police speak with some of the young people involved at The Event Place brawl.

This morning, Vicksburg Police Chief Milton Moore has ordered The Event Place closed until a meeting can be had with building owner Daryl Hollingsworth. In the past, the city has required a property owner who hosted an event where shots were fired to sign a letter of agreement to improve security procedures.

The city has two cameras in front of The Event Place, one looking north and one looking south. 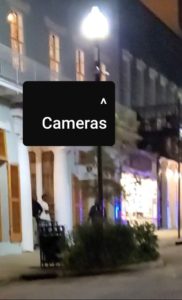 Two city cameras outside the front door of The Event Place.

Related Topics:#ourchildrenFeaturedVicksburg Police Department
Up Next