Cris Reeves bounced around from one job to the next for a few years after high school before he found the deckhand program at Hinds Community College Vicksburg-Warren Campus.

“I worked lawn care, retail, pipelines, a lot of things,” Reeves said. “Main thing was I was trying to make some money doing just about anything.”

In 2017, he completed the week-long program at the Vicksburg-Warren Campus and was hired at Yazoo River Towing. Now a First Mate and Steersman, Reeves, 25, originally from Searcy, Ark., has job skills and a steady career on the waterway.

“Being part of the program here has given me special skills to work on a towboat, even things like cooking,” he said. 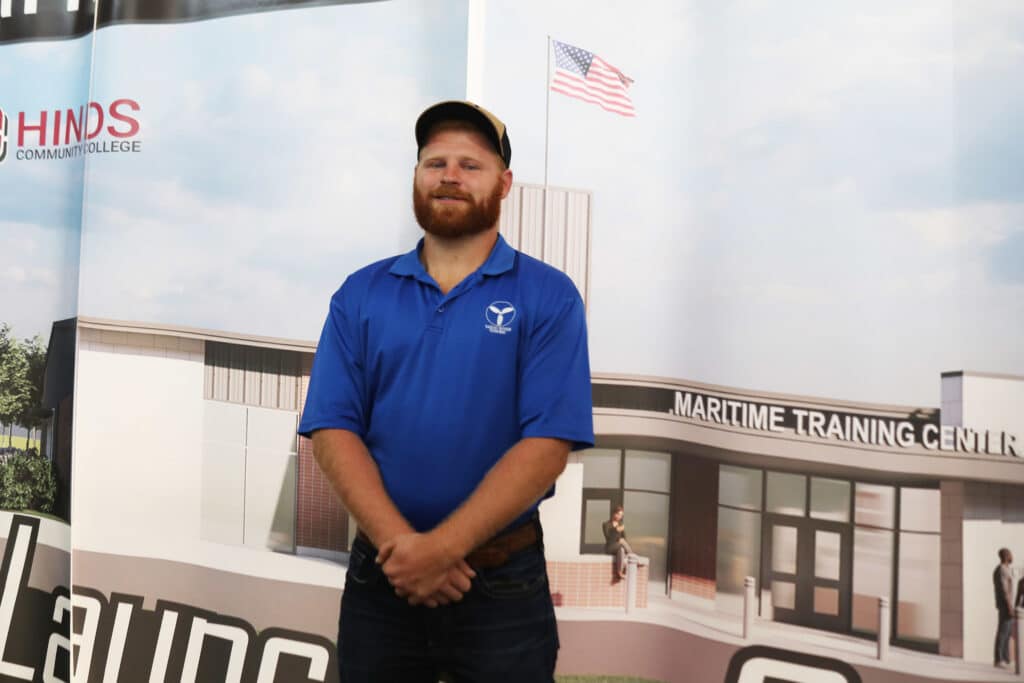 Reeves told some his story before those who gathered Oct. 28 to launch the Maritime Training Center, located across Highway 27 from campus. The facility will be renovated and will allow the deckhand program to expand to add training for a wider variety of higher-paying jobs on the waterway, including tankermen and pilots, plus safety training and other maritime jobs.

The 15,700-square-foot building will house a large circular commons area, four classrooms, training labs, office and meeting space, galley and dining area, living quarters for 14 students and two instructors as well as other accommodations that simulate living full-time on a river barge in a working environment. The three-acre site on which the building sits will also include outdoor space for training activities.

“This facility will provide for us an opportunity to more closely simulate life on the boat,” said David Creel, associate vice president of Workforce and Community Development. “Students will have living quarters in the facility. They’ll have galleys to prepare their own meals, similar to what they do on the job. The idea is they’ll come in when the deckhand classes start and they’re here until they finish the class. 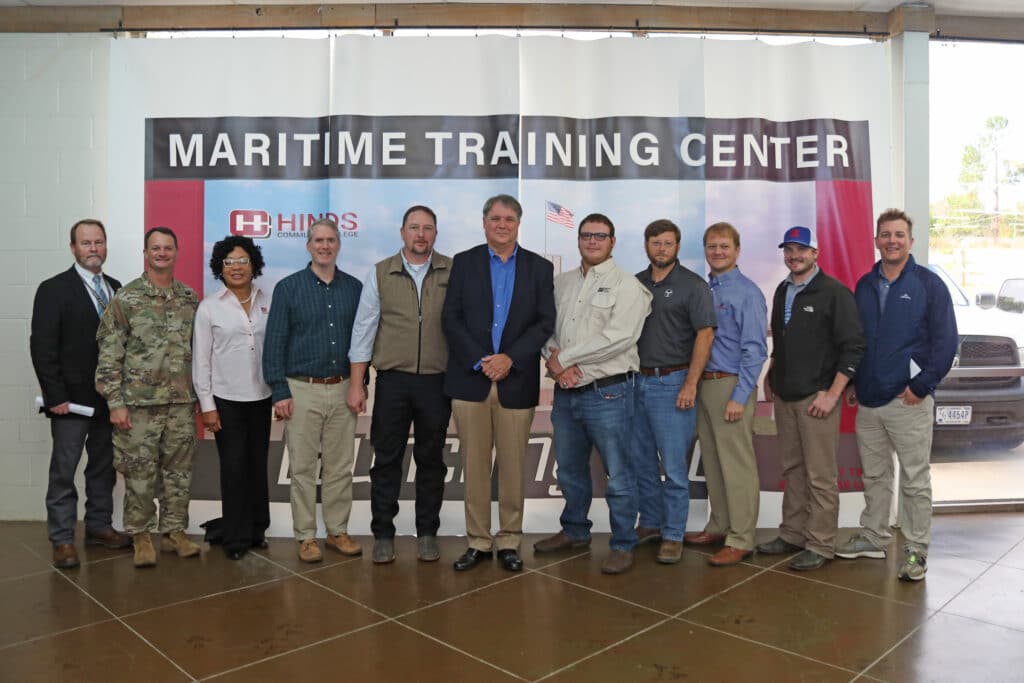 “One of the things this center will do more than anything else is help us recruit people into the industry,” Creel added.

The academy is the focal point of a partnership between Hinds and several private and public entities with an interest in the maritime industry. Those are Golding Barge, Magnolia Marine, Yazoo River Towing and the U.S. Army Corps of Engineers.

In May 2021, the U.S. Maritime Administration (MARAD) named Hinds among 27 academic institutions as its first-ever Centers of Excellence for Domestic Maritime Workforce Training and Education (CoE), to prepare students for careers in the nation’s maritime industry.

The designation elevated the program at Hinds, which has existed exclusively as a training program for deckhands. Hinds was also awarded a Workforce Opportunity for Rural Communities (WORC) grant by the U.S. Department of Labor and the Delta Regional Authority to continue the deckhand training program and expand maritime training opportunities. In an expanded academy setting, deckhands will have an opportunity to grow their earnings potential and mobility within the industry.

“It’s an opportunity not just for Hinds Community College, not just for Vicksburg, but for our entire state and our region,” said Hinds President Dr. Stephen Vacik.

State lawmakers approved $1 million in bonds for the college to purchase and renovate the building so the program could be re-housed on a permanent basis. 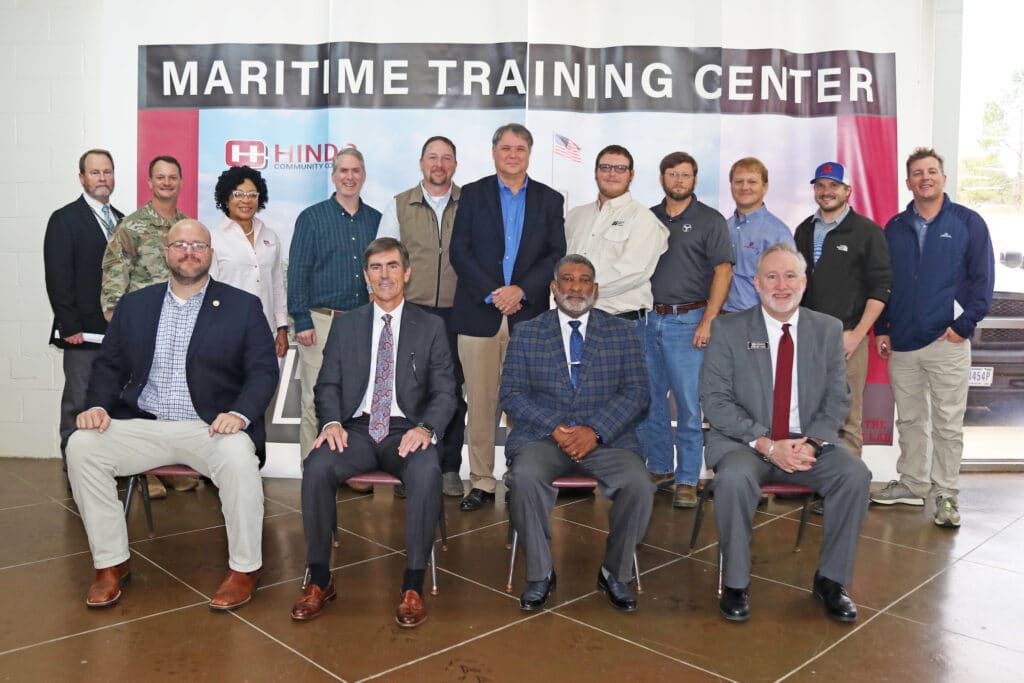 “Hinds has taken the lead on doing something about maritime training,” said state Sen. Briggs Hopson III, who noted in his remarks the need to help make Hinds adapt to the needs of its students. “I recognize the importance of what the maritime industry means to our commerce and our economy in this country. It’s important for companies like Golding Barge, Yazoo River Towing and Magnolia Marine. They recognize the importance of the maritime industry and having good workers to come in and get the job done.”

Partnering with an academic institution such as Hinds allows the industry to gain that quality workforce, now in an environment that will show every aspect of the job, said Stirlin Hancock, vice president of Human Resources for Golding Barge Line.

“We’re taking employees and asking them to leave their families for 28 days at a time and go home for two weeks,” Hancock said. “How do you train someone to be gone for 28 days? That’s one of the toughest things in our industry – to train someone and have them know what the job actually entails. So, to have this facility is huge.