He was hired by Warren County Sheriff Martin Pace as a juvenile officer when the youth court opened 18 years ago. “When we opened the Juvenile Detention Center in 1997, Joe Tillman was one of the original employees. He was a dedicated professional juvenile officer and cared dearly for the children of this community,” expressed an emotional Sheriff Pace. “He will certainly be missed by all. And I mean that. He had the children of this community in his heart, I mean, he worked for them. Took time with them, always believed that every single child deserved an opportunity and he was just a good guy.” 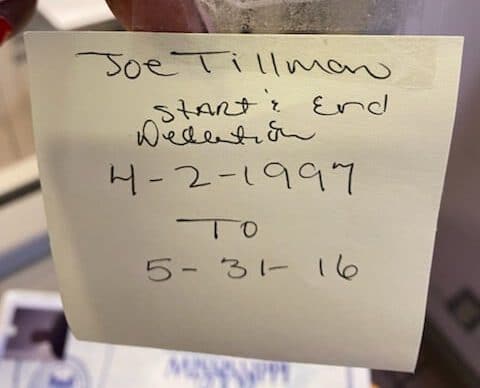 “Joe Tillman worked with me when I was director of the Youth Detention Center. He was an outstanding worker, a loyal worker, and he’s just a great person. Little known is that Joe has been instrumental in Vicksburg in the election of a lot of people. He loved campaigning for candidates. He was just a great humble guy. I probably owe Joe Tillman more than he could ever owe me for who I am,” reminisced Mayor George Flaggs. “One of the best prognosticators you’d ever want to see.”

His sister Linda Tillman Fletcher said, “Those kids, he loved those kids. I mean, every day I go somewhere and someone says Joe is your brother? He helped me so much when my kids was in trouble. You know, he just loved children.”

Tillman began dialysis in 2012 but continued to work. In November of 2016, while doing the job he loved, he became sick at work and soon was moved to his sister Linda’s house. “He took care of my mom. When she got sick in 2012 and he couldn’t endure, he couldn’t understand it. My mom got sick and we brought her home with me and he followed my mom out to my house and we ended up taking care of both of them.”

“My husband is the one, he’s been taking care of them,” expressed Linda Tillman about her husband and caregiver, Freddie Fletcher. “My husband would get up every morning and take care of him, feed him, whatever he need, I mean standing right there beside him the whole time. I was still working at the corp and retired in 2020 and wanted to come home and give him a break. But he took care of him just like he was a blood brother.”

“His sister Linda deserves praise. She left her job to take care of him,” said the Administrator of the Detention Center, Kathy Holden. Holden went on to praise Linda’s brother, Joe, “I kid you not, and when I say it, that’s the real deal, that guy was pure! Of course, nobody is perfect but he was pure! He was a GOOD guy. I’m telling you when you come across somebody just got a good, good heart. The good Lord didn’t bless him with any biological children, but I guarantee you there’s a whole bunch of children that belong to Joe and are going to miss Joe.”

Lionel P. Johnson, Sr. was a lifelong friend of Tillman. Of Tillman, he said, “Joe was one of my best friends for over 25 years, we started around the same time, me at the Sheriff’s Office and Joe at the Juvenile Detention Center. Joe helped the Sheriff’s Office in so many different ways and he was dedicated to those kids at the juvenile center. He was the type of friend who helped elevate you in your darkest moments and helped you to rise up and be the best that God wants us to be, a straight God-sent friend.”

Tillman was one of 11 siblings, including two sets of twins. He never married or had children of his own.

W.H. Jefferson Funeral Home will be handling the arrangements for Joe Tillman and the Vicksburg Daily News will post the obituary separately.

Cheers to 25 years of the Vicksburg Convention Center

MDOT says they are ready for winter