News People Those who keep us safe

Can lawmakers keep abortion pills out of Mississippi? Local, international activists say no.

I-20 East Mile Marker 15 shutdown due to MVC

Mackenzie Milburn survives after tree traps her in her home

Another Mississippi ‘trigger law’ to keep an eye on as Supreme Court deliberates: gay marriage

“I’ve always been around it. Growing up my dad worked at the Tensas Parish Sheriff’s Department for several years. I have uncles and cousins in law enforcement in some capacity, I was always around it,” said Merritt.

After graduating from Northeast Louisiana University, now called Louisiana Monroe, Merritt joined the Vicksburg Police Department in July of 1993 as a patrol officer. In 1997, current Vicksburg Police Deputy Chief Charlie Hill recruited Merritt for the narcotics team. “I was his training officer for a while. Jeff is driven, he is driven to do the work and he likes doing it. When you work narcotics at that level you’re going to have to like what you’re doing,” said Hill.

Hill teamed Merritt up with DeWayne Smith, who now works in investigations, and the two became known on the streets as “Crockett and Tubbs”, a reference to the show Miami Vice.  According to Smith, “I met Jeff Merritt in 2003 when I got transferred into narcotics. After a while, it was just me and Jeff, ‘Tubbs and Crockett’. People on the street gave us the nickname after we began to make major drug busts. I found a shirt in Atlanta, Georgia that said ‘You can’t sell dope forever.’ That shirt became viral around Vicksburg. We both wore the shirt on our major busts.”

After a long qualifying statement about how much he likes working with Donnie Heggins, Merritt said, “Dewayne Smith is the best officer I’ve ever worked with. You saw one of us, you saw the other one. Crocket and Tubbs. If we was ever separated they would ask ‘where’s twin where’s Jeff?’ Everybody on the street got to know us.” 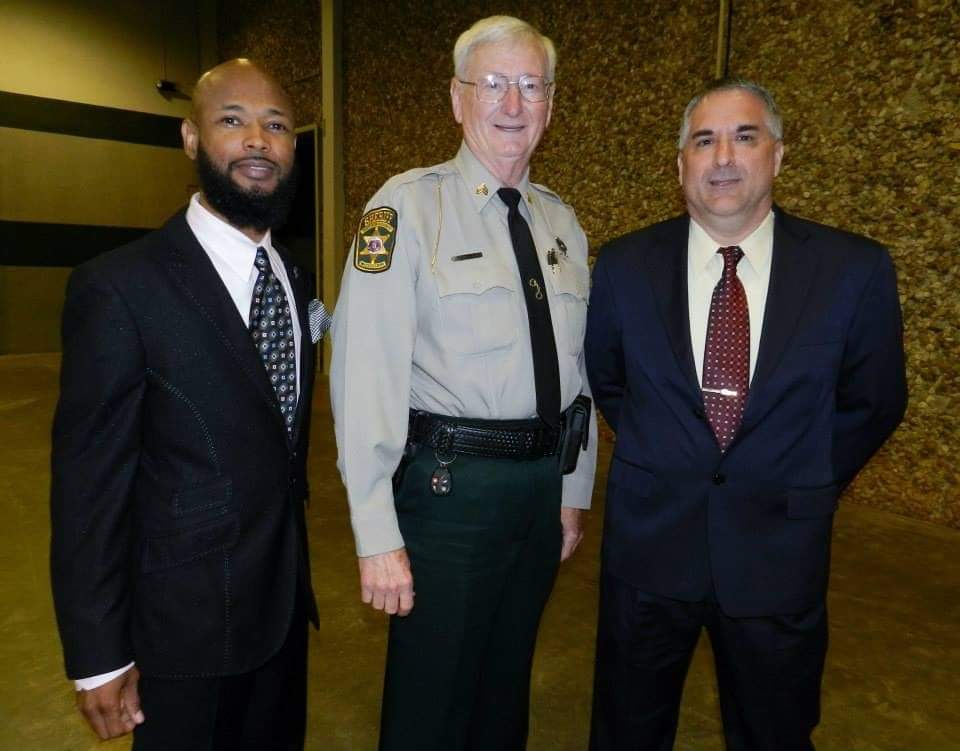 A couple of years into the narcotics division, Merritt became involved in a years-long investigation that included the FBI, the DEA and the MBN that dismantled the Michael Tyler drug organization. Tyler was considered “untouchable” because of the size and depth of his drug organization in Vicksburg. However, Merritt along with Smith and the other agencies methodically tracked down hundreds of transactions over several years along with other bits of evidence that eventually ended in the arrest of 8 people at the top level of the Tyler crime organization.

David Kenney at WLBT wrote a story about that law enforcement operation and called it “The largest drug bust in Vicksburg in recent history.” Agents seized cocaine, marijuana, ecstasy along with numerous weapons, including an AR-15 and over $100,000 in cash, according to Kenney’s report.

Through the years, Merritt has developed a reputation in the community that he is thorough and fair. “If he shows up with a warrant the dealers know they aren’t getting away, they aren’t getting out of it and they have little to do but surrender,” explained partner Smith. “There have been some cases where people said “I heard you was looking for me. If he’s looking for me, he’s going to find me one way or the other so I just came on down.” Merritt explained, “A lot of that has to do with the way you work. you treat ’em right and you do your job they’re going to come to you.”

“They will see Merritt, know they’ve lost and put their hands behind their back to be cuffed,” said a very serious DeWayne Smith.

In 2015 Merritt and Smith received the Top Cop award from the State of Mississippi for their work in a major drug bust that resulted in 23 people being arrested.

On Merritt’s retirement, District Attorney Ricky Smith said, “I am not looking forward to Jeff retiring. In fact, I have tried to talk him out of it a couple of times. He has a wealth of knowledge and experience that can only come from being directly involved in fighting the narcotics trade in Warren County for as long as he has. Anytime we need to know the history of one of our defendants we go to Jeff and he almost always can fill us in on the type of person that we are dealing with. That knowledge is priceless to us when we are trying to decide a proper sentence for an individual. He is highly respected by my office and other law enforcement officers which goes without saying. But he is also respected by those he works to arrest and take off the street. That is an attribute that comes only from treating those defendants with dignity and professionalism. The dealers knew that when Jeff came for you you were done but that it wasn’t personal, it was his job and he did his job well.”

“What’s ironic is we were talking about some old cases over the years. some of these guys right here,” explained Merritt. “You’re just doing your job, Jeff. You caught me, I’m going to do my time. You’ve never done me wrong. They say, ‘It’s just a game and you caught me.”

Smith echoed that saying, “We would call them up and say we’re looking for them. They would tell us ‘you don’t need to come to my mom’s house or my grandma’s house or anything, I’ll turn myself in at this time.’ We are very known to these criminals around here as Crockett and Tubbs, Miami Vice,” smiled Lt. DeWayne Smith. “They know it’s a cat and mouse game. Sometimes you win and sometimes you lose. Most of the time y’all win and we lose, but this time we won and you’ll suffer the consequences and get incarcerated.” 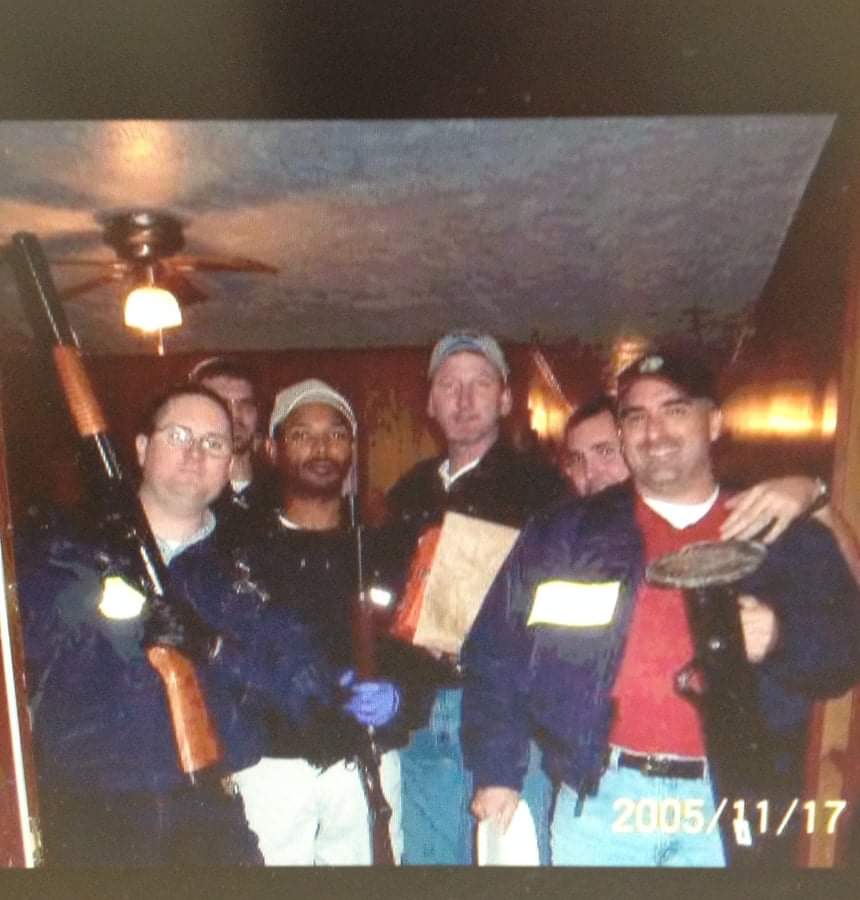 After a lifetime doing it, and doing it well, the Vicksburg Daily News asked Merritt what advice he had for new officers just coming into law enforcement. Merritt said, “Slow down. Just slow down, listen to officers that have been here. Take their advice, learn from us – ask questions. If you make a mistake it won’t just cost you your job, it may cost you your family, your livelihood, your life. Do your job and just listen, take their advice.”

“I’m probably going to do some security work and maybe do some part-time work. I doubt I’ll just sit around. Over the years, it’s a tiring job. You’re out here dealing with all sorts of people. All the thousands of search warrants over the years. You never know what’s behind that door. It’s time.”

Merritt is engaged to Teresa Lusby and was noncommittal about getting married sometime next year. He has a daughter and Lusby just had a granddaughter.

“The police never goes out of you,” explained Merritt. “I can’t imagine I’d see a crime happen and not call somebody. I’d watch him but I’d call. As far as what I do, everybody’s always been good to me. If I ask for something they try to give it to me. They know what we’re out here trying to do.”

Merritt went on to commend Chief Jones and the current administration of the police department, “It’s a good direction. I think they’re going to be in good hands.”

Smith noted that a lot of criminals are going to be happy about Merritt retiring, “All of them! I know a lot of them are going to be happy about him retiring but at the same time, we got a lot of respect from the guys we arrested. We see them on the street and they speak or whatever, half of them even ask to buy lunch. There might be 10% that hold a grudge, but the other 90% respect Jeff and myself. They knew we were fair to them and the game they were playing they were bound to get caught.”

Smith offered his long-time partner these parting words, “I was hoping we would someday rejoin but we will remain friends and keep in contact. I wish him well. God Bless he and his family and everything is going to be alright.” 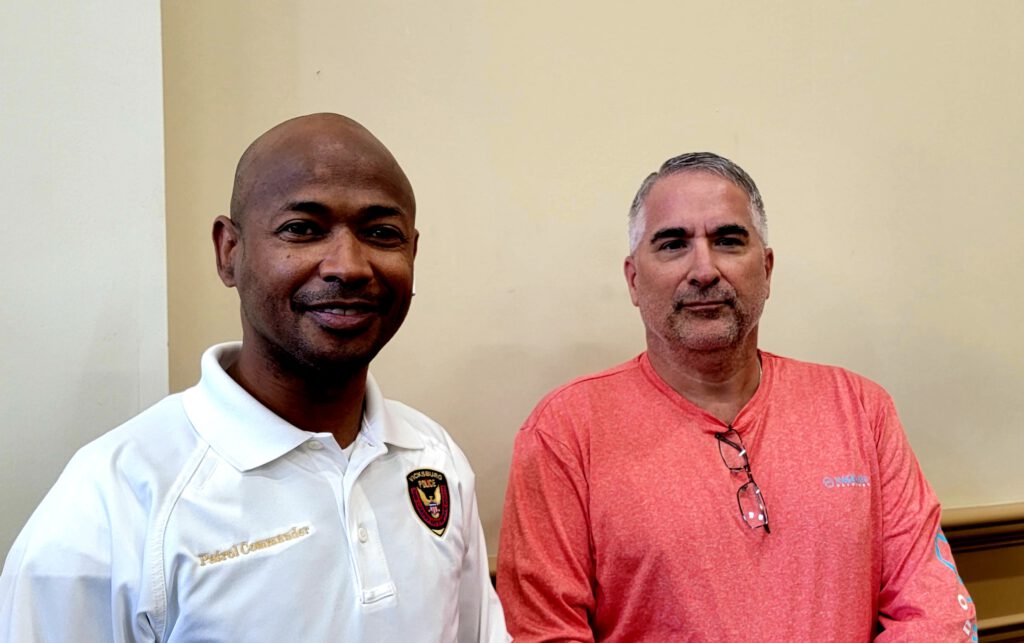 Crockett and Tubbs at the VPD, October, 2021. Photo by David Day.

The 7th annual Spooky Sprint results are in