Outdoor skate and rock show set for July 30 in Vicksburg

Late Friday afternoon, I received a call from Sam Andrews in the Mayor’s office, telling me two people were flying around the area of the hospital on U.S. Highway 61 North, in some form of para-gliding type aircraft. So, I decided to go investigate.

I arrived at the Sherman Avenue School to find two men flying what is known as a paramotor. The small back-pack type aircraft are apparently becoming very popular.

Paramotor is the generic name for powered paraglider, and there are two basic types: foot or wheel launch. The motor allows for the paragliding experience without the need of a high point to jump from or being pulled by a vehicle to launch. Flyers can launch from nearly anywhere. What looks like a parachute is the glider wing that allows for lift, navigation and the ability to glide. 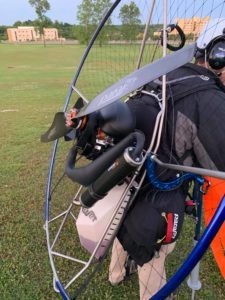 The motor and fan of the paramotor. (Photo by Thomas Parker)

Leon Pugh has owned a paramotor for several years. Recently, he was working on a house he owns near the water tower on Culkin Road when he saw Jarad Harvey flying nearby. Pugh followed Harvey back to his landing zone in front of the school, and the two became friends and flying partners.

Pugh, who is currently on leave from his position in maintenance at Ameristar Casino, is a bit of a technical wizard who enjoys tinkering with things slightly “outside the box.” The younger Harvey is employed at Grand Gulf Nuclear Power Station.

Friday afternoon, the weather and wind conditions were just right for a late day flight.

Harvey says when the winds are right, he can take a running start and be airborne in about 30 yards or less. He added that wind conditions are a key factor in flying safely.

Pugh normally enjoys flying in the northern part of the county near Redwood. Unfortunately, right now most of that area is under flood water. Harvey said power lines and trees are also a point of concern during landing and take-off.

Paramotors do not require a license but some training is involved. Harvey said you can take them up about as high as you can stand the oxygen deprivation. The units range in price from a few thousand dollars up to around $20,000 and come in several varieties.

Pugh and Harvey plan to continue flying together as often as their schedules allow. The Friday flights drew quite the crowd of on-lookers. Pugh said at one point during his flight he caught sight of the cooling tower at Grand Gulf.