July is ushering in more steep rises in new COVID-19 cases statewide and in Warren County, although the numbers of deaths have not shown a corresponding increase.

With no new deaths reported in Warren County, the county’s death toll remains at 17.

Deaths in the county include eight residents of Heritage House Nursing Center. As of Thursday, June 25, MSDH reports that Belmont Gardens is the only long-term care facility in Warren County under investigation for an active COVID-19 outbreak. The facility has one COVID-19 case among staff.

MSDH reports that nine Mississippians died of COVID-19 statewide Wednesday, bringing the total number of deaths in the state to 1,082. Nearly half of the state’s deaths, 527, were people in long-term care facilities. The state’s mortality rate of deaths to confirmed cases is about 3.9%.

COVID-19 deaths are reported in the following counties Wednesday:

Deaths and new cases were reported as of 6 p.m. Tuesday, June 30. MSDH usually reports new statistics on the COVID-19 coronavirus each day based on the previous day’s testing and death reports.

MSDH has estimated the number of people who can be presumed recovered from COVID-19 in Mississippi. That number is 19,388 through Sunday, June 28. This figure is updated weekly. It represents about 69.5% of the cumulative 27,900 cases reported as of Wednesday, July 1.

These estimates are based on MSDH’s guidelines for calculating estimated recoveries when hospitalizations are not known, using the number of cases 21 days ago, less known outcomes (deaths).

The primary metric concerning state health officials are the numbers of people hospitalized. That number has continued to climb with new COVID-19 cases. Mississippians hospitalized for the virus as of 6 p.m. Sunday, June 28, is 786, including 579 with confirmed cases of COVID-19 (another new high) and 207 people with suspected but unconfirmed cases. Of those with confirmed infections, 160 were critically ill and in intensive care units, and 85 were on ventilators. 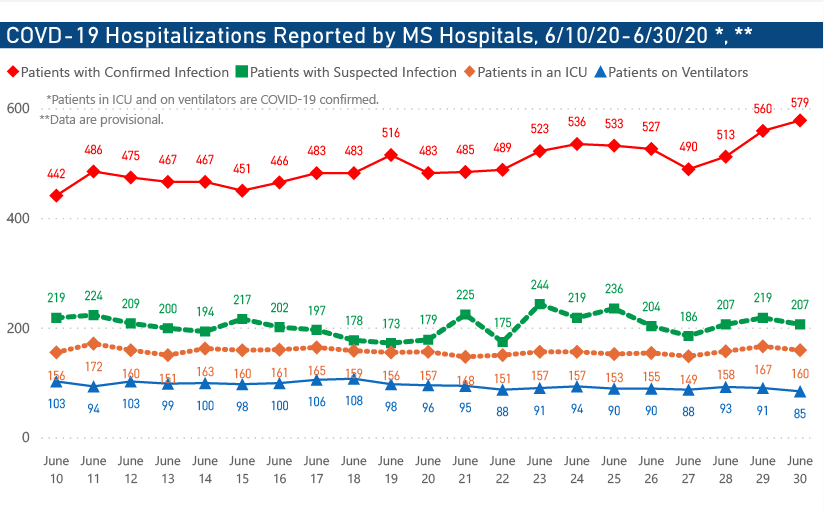 See a typo? Report it here.
Related Topics:COVID-19 coronavirusFeatured
Up Next

University of Mississippi publishes its plan to return to campus