Nailor brothers model loyalty and a commitment to a healthy lifestyle

My Journey to Health – Week 34

My Journey to Health – Week 33

My Journey to Health – Week 30

My Journey to Health – Week 28

My Journey to Health – Week 27

My Journey to Health – Week 26

My Journey to Health – Week 24

My Journey to Health – Week 23

My Journey to Health – Week 22

My Journey to Health – Week 21

My Journey to Health – Week 20

My Journey to Health – Week 19

My Journey to Health – Week 18

My Journey to Health – Week 17

It’s almost that time of year when many people resolve to make drastic lifestyle changes and better ourselves: New Year’s Day.

Unfortunately, most of us, no matter how committed we are on Dec. 31, usually find ourselves right back in our old habits by Valentine’s Day (if not earlier).

Those of us with little resolve could take lessons from Cameron Nailor, a Vicksburg youth who decided to get fit and never looked back.

Cameron, now 14-years-old, has always been athletic and active, but at the age of 8 he started gaining weight quickly. His parents, Kimberly Nailor and Preston Nailor, took him to a gastroenterologist who diagnosed Cameron with a stomach condition, and he placed the boy on a special diet and medication.

In spite of the treatment and diet, Cameron continued packing on weight.

He began getting teased, and he was at the age where the taunts became too hard to laugh off. Even good-natured ribbing from his younger brother and best friend, Brandon, took its toll.

“We were in Walmart once, and an older person said that Cameron needed to stop eating all the food so that his brother could eat and gain weight. I do not recall what I said to the person but I went off to the point where he apologized to Cameron,” said Kimberly Nailor. “I am a fiery momma bear! When someone says something or does something to hurt my kids, I become very protective,”

When the family got home that evening, Brandon realized how hurtful the remarks had been to Cameron.

“He told me he wanted to help Cameron get in shape,” Nailor said. “I, too, had struggled with being overweight as a child, so I know the pain that comes from being teased by your peers and enduring rude comments from strangers. I was all for it.”

Nailor said both boys are very athletic and competitive. 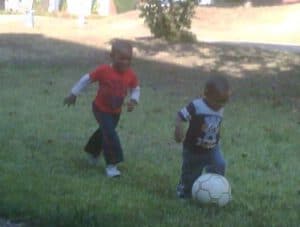 The boys have been energetic and competitive all their lives. (photo courtesy Kimberly Nailor)

“We started exercising in the backyard, and Brandon would challenge Cameron to race him or play a competitive sport like basketball or football,” she said. “Cameron did not realize that his quest to beat his brother started helping him exercise harder.”

Sgt. Tommy Curtis with the Vicksburg Police Department also does some personal training, and he began working with Cameron. Soon, Brandon begged to train with Curtis, too.

Cameron plays football for Warren Central Junior High School. He plays on the offensive line, but wants to be a running back. Due to his larger frame, he was not selected for the position. He started training even harder to lose weight because he wanted an opportunity to play his favorite position. 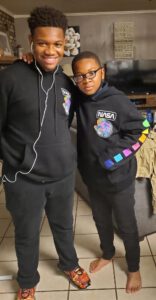 “One night Cameron snuck into the kitchen to get some Oreos. Brandon walked up behind him and said ‘Okay, Mr. Running Back. You think you need those Oreos?’ Cameron put the cookies back in the cabinet,” Nailor said.

Brandon motivates Cameron by reminding his big brother of their dream to play in the NFL together. He and Cameron can often be seen outside running drills and practicing plays.

Cameron has reached his weight goal, and now he is focusing on toning and building his speed and strength. When he works out with weights, his brother is right there to spot him.

“I always knew Cameron had the strength, determination and dedication to lose weight, but I know the support and competition from his brother is what truly motivates him to keep pushing,” Nailor said.

“They are fiercely loving and protective over each other,” the self-proclaimed Mama Bear added with tears of pride in her eyes.

“I am so proud of my sons for the love and support they have for each other.”