JACKSON, Miss. – When she graduated from the Chicago Police Training Academy, Mary Eileen Paradis was merely following her family tradition.

Her father had been a police officer in Chicago. Her grandfather, great-grandfather, several uncles and a niece also had, or are having, distinguished careers in law enforcement. 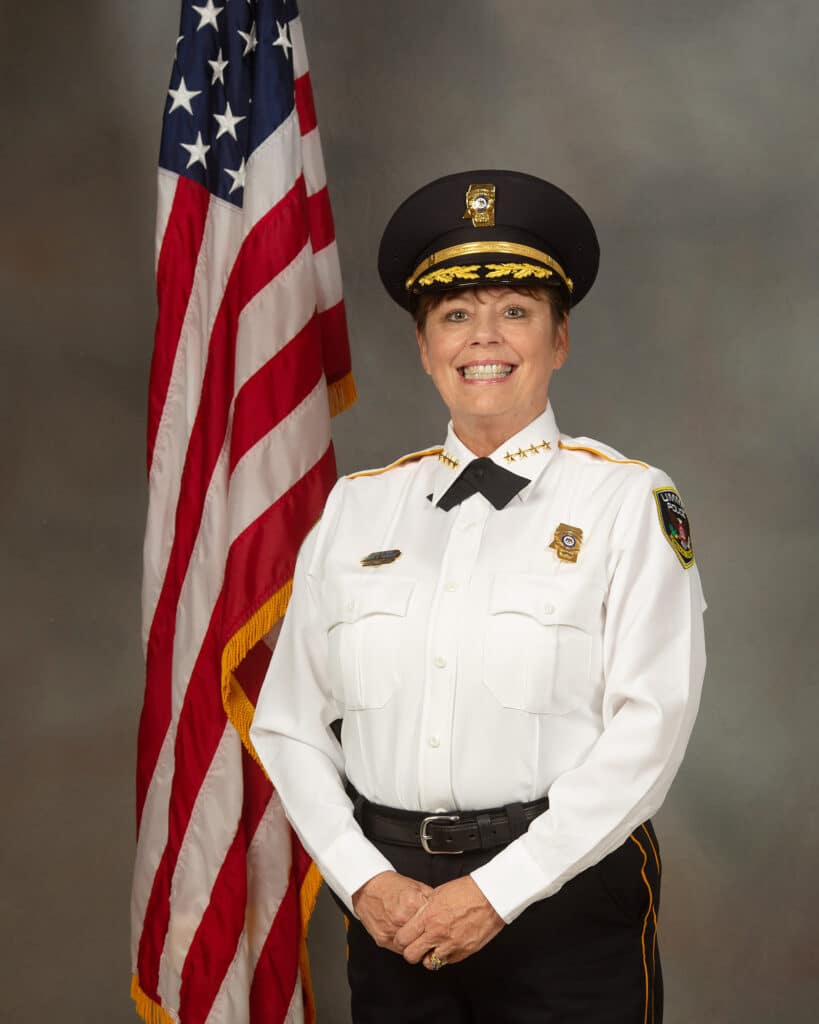 “That was something new in Chicago,” Paradis said with a spirited laugh. When she became a police officer serving the Windy City’s South Side, she was one of the first female law enforcement officials in her district – which included famous Comiskey Park, home of her beloved Chicago White Sox.

“When I worked patrol in the South Side, there were some tough neighborhoods,” she said. “People really wanted to see the police there – they embraced the police. It was new to them that a female would be responding to their call(s). They often used the term ‘lady police’ to describe me.

Paradis chose not to take offense.

“We (female officers) were like this new thing,” she said. “It was something for people to adapt to. I do not think there were really any hard feelings or anything, but I had to go in with my eyes open and know they probably had not encountered female officers before.”

“Once they got used to me, I was greeted with open arms. Once they become accustomed to you, people become very accepting of you.”

She was even able to turn the occupational challenge into an advantage.

“At times, I may have been the only female officer working the whole shift in two districts. It was unique in a way because people embraced us.”

“Children and female victims of crime often made eye contact with you and were more open to approaching you because you were a female. There was like this automatic maternal bond with them.”

More than 30 years after she first started patrolling the city streets of Chicago, Paradis is still someone new: the first female Chief of Police and Executive Director of Public Safety for the University of Mississippi Medical Center’s Police Department. She brings with her vast experiences she has accumulated throughout an impressive career in law enforcement, public safety and emergency management, commencing on the city streets of Chicago, then at some of the largest and most name recognizable corporate properties near and in the Nation’s Capital, and ultimately in the halls of academia.

Law enforcement and public safety is more than an occupation for Paradis – it is a way of life for her immediate family. Her husband, Peter Paradis Sr., a former police officer and current career federal agent, works within the Federal Inspectors General community.

The couple’s oldest son, Peter Paradis Jr., is a recent graduate of Longwood University’s Criminal Justice program and, after having served as a volunteer Firefighter throughout his collegiate career, is enrolled in the Rappahannock Regional Criminal Justice Academy where he is completing training to be a Certified Deputy Sheriff with the Goochland County (Virginia) Sheriff’s Office.  Only youngest son, Patrick Paradis, seemingly has steered away “for now” from the law enforcement calling. He is a senior at the University of South Carolina, completing a double business major in finance and economics.

Peter Sr.’s federal agent career was the catalyst for Paradis’ move away from Chicago to Washington, D.C., where she sharpened her law enforcement, public safety and emergency management expertise in different industries in and around the Nation’s Capital. It was not until she became the interim Police Chief at the George Washington University (GWU) that she found a calling in the academic arena.

She obtained her Bachelor of Professional Studies in Police and Security Studies, and her Master of Professional Studies in Cybersecurity Strategy and Information Management, from GWU; also earning the Distinguished Scholar Award, the Academic Achievement Award and the Dr. Richard F. Southby Police and Science Prize. She admits pursuing an advanced degree, working in law enforcement administration and serving as a full-time mother to a couple of teenagers was quite challenging.

“It was a balancing act,” she said. “But working in higher education, you are surrounded by educators, and it is really hard not to get the education ‘bug.’ I had a lot of undergraduate and postgraduate students who worked for me. It was a very active life, but there was a desire, a burning in my heart, to get an advanced degree.”

“Working in higher education, how could I, as a chief, expect to provide career development for my personnel, to encourage them to move forward with their own education, if I was not doing the same thing?”

As it turns out, education, like law enforcement, is a family tradition for Paradis. 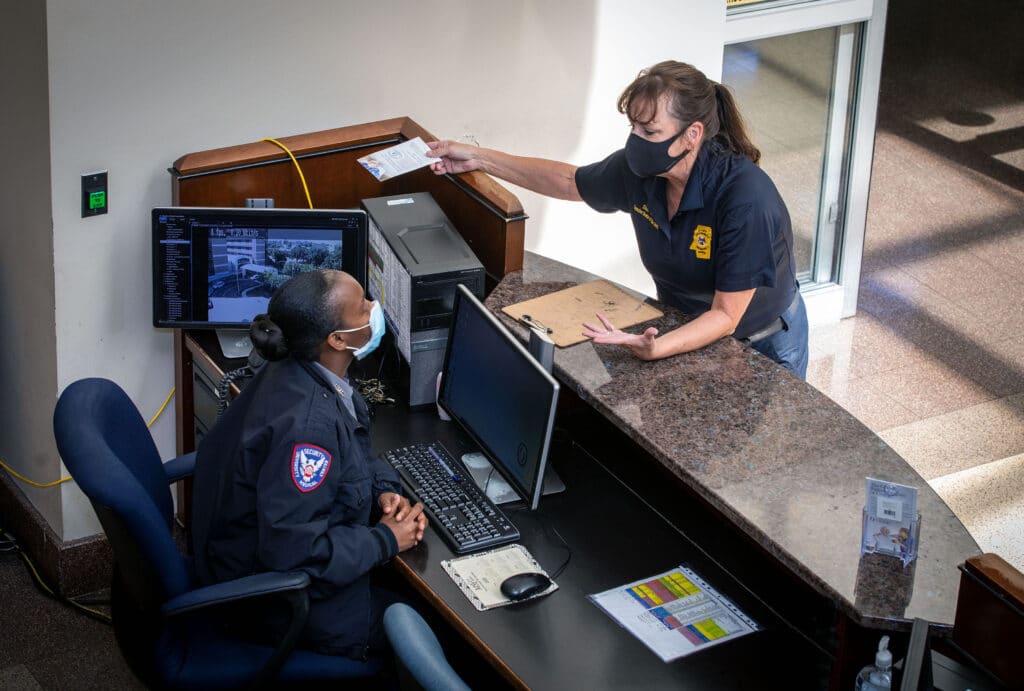 “My grandmother and my aunt were educators,” she said. “In my ‘then’ world, you were either a teacher or you were a police officer. They kind of go hand-in-hand. We are here to serve people, whether in education or law enforcement, and I have the utmost respect for teachers, as I do first responders.”

Paradis was serving as an assistant vice president of safety and security at Marymount University in Arlington, Virginia, overseeing the Office of Safety and Emergency Management, when Dr. Jonathan Wilson, UMMC chief administrative officer, approached her about leading UMMC’s Police Department. She admits she was not too familiar with UMMC, but soon discovered a passion for the institution, its people – and its purpose.

“Dr. Wilson is the most genuine boss I have ever worked for in my career,” Paradis said. “He has ‘clinical side’ experience with emergency management and exhibits the utmost recognition and respect for the need for ‘public safety’ as a whole. I was initially drawn to UMMC because of him.”

Wilson said extensive experience in public safety, particularly in a higher education setting, made Paradis the best choice for leading the Campus Police and public safety at UMMC.

“Chief Paradis understands how to ensure a safe campus for students, employees and the patients and families we serve. She has been a visionary leader throughout her distinguished career, and I have confidence she will support the department’s mission to enhance the quality of life on campus by working cooperatively with Medical Center leaders to provide for a safe environment,” he said.

“I have been doing this type of work for 35 years, and I have never received a warmer welcome than I have from the UMMC community,” Paradis said. “You do not get that in all places. The institution’s leaders, including Dr. LouAnn Woodward (Vice Chancellor for Health Affairs) and Dr. Patrick Smith (Chief Faculty Affairs Officer), are all really committed to what they are doing: educating the health care leaders of tomorrow, conducting state-of-the art research and providing the best health care available in the state of Mississippi.”

“I do not know if you realize what a truly phenomenal team you have here in Mississippi.”

Paradis said one of her first major priorities at UMMC is to work toward obtaining accreditation for the Police Department. That goal seems a natural, considering her twin legacies in education and law enforcement. 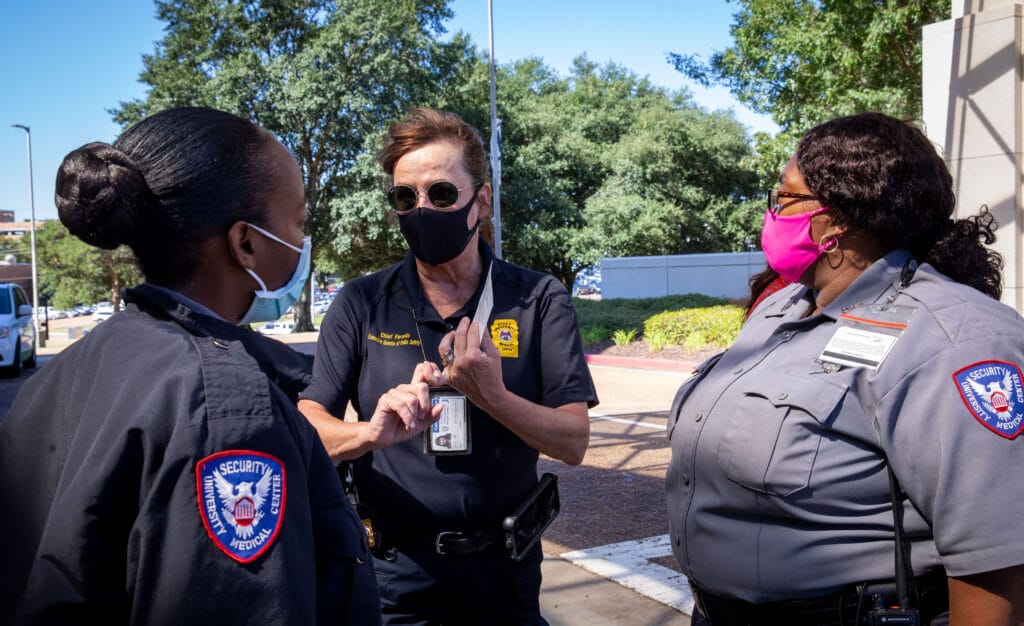 “The Commission on Accreditation for Law Enforcement Agencies (CALEA) is the gold standard,” Paradis said. “When you are talking about higher education, everything is accredited. Why would we not have the UMMC Police Department obtain the highest level of accreditation as well?”

“CALEA raises the bar for what we do with our policies and procedures, standards and training.”

“Right now, seeking (CALEA) accreditation is something that will move us in the right direction to operate at our optimal performance level. That is something that is important to me as a leader and as a chief.”

What is also important to her as the department’s new leader is collaboration with her staff. She said she has received a warm welcome from everyone. “I had only been here a week, but two female officers stopped me and said they were so excited to hear that our next police chief was a woman. It was kind of neat. That made me feel good. I can talk about diversity and inclusion based on my role in Chicago and knowing what it is like to be ‘different.'”

“Now females in this profession seem kind of mainstream – I think women compose about 13 percent of sworn officers in law enforcement now. When I was in Chicago, it was more like .01 percent. We are making inroads, but at a much slower pace than say the military.”

“My reputation is built on transparency, trust and integrity,” Paradis said. “My goal is to have the Police Department become part of the intertwined fabric of UMMC, not a ‘silo’ sub-organization.”

“Another goal of mine is to bring diversity, through inclusivity, into the department to mirror more the community we serve. I am all about education, and I am all about our commitment to the UMMC community.”