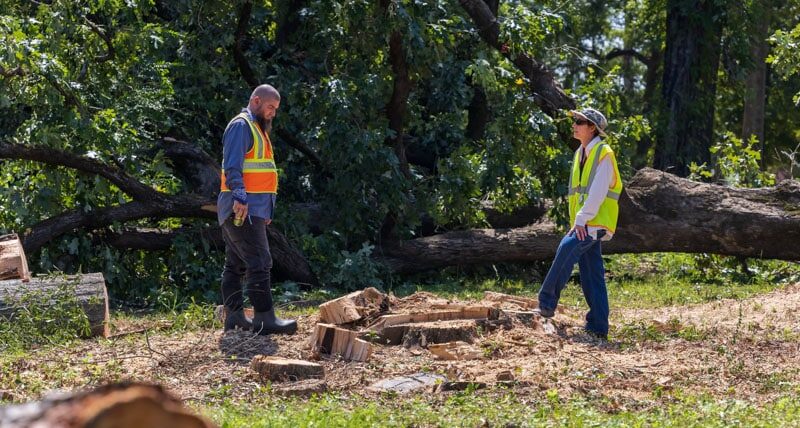 In a milestone for the years-long Asylum Hill Project, a team of archaeologists should begin exhuming human remains this month on the campus of the University of Mississippi Medical Center.

Clearing the way for this next step of the undertaking was last month’s removal of trees on a section of land holding the graves of thousands of people who were residents of the vanished State Hospital for the Insane which operated for 80 years on what is now Medical Center ground.

The cutting of trees over an approximately four-acre section of the project area was a major phase of the ongoing mission to unearth, study and respectfully memorialize those asylum patients whose bodies were never claimed, as UMMC officials map out an ethical way to reclaim the burial site for potential land development.

About to commence as well is the construction of a six-foot high, chain-link privacy fence with slats to obstruct views outside the excavation site in the northeast corner of the campus.

“Right now, the focus is on getting the equipment here, the excavation team here, getting a fence up and excavating the remains,” said Dr. Ralph Didlake, leader of the Asylum Hill Project and director of the Center for Bioethics and Medical Humanities.

That equipment includes a track hoe, which has a digging arm. Its operator will carefully scrape away the top layer of soil over the burial ground, just inches at a time, until the soil’s appearance changes, indicating the presence of interments beneath.

“The contractor, who is from Mississippi, specializes in this type of archaeological machine excavation,” said Dr. Jennifer Mack, lead bioarchaeologist for the undertaking.

A team of seven archaeologists, including Mack and scholars drawn from locations such as New York, Florida, Ohio and even Guam, some 7,500 miles away, will do the rest by shovel and hand.

Tree removal was necessary before exhumations can begin. Most of those taken down were hardwoods, Didlake said. “We think there are only a few trees that date back to when this area was an active cemetery.”

The project includes plans for tree replanting. The types of replacement trees will be based on the inventory documented by Lida Gibson, the assessment and research coordinator for Asylum Hill. “We do want to re-establish the tree canopy on campus,” Didlake said.

But, Mack said, “obviously not in the same place.”

As work proceeds, the experts cannot be sure how deep the graves lie. Thanks to geophysical surveys and other means, they have been able to estimate that as many as 7,000 constitute the asylum cemetery. The first coffin discovered, in late 2012, was about one foot deep.

Mack estimates that the ones about to be uncovered will be four or five feet down.

A harvesting machine known as a feller buncher takes down a hardwood during the tree removal phase of the Asylum Hill Project. The project includes plans for tree replanting to re-establish the tree canopy on campus. (UMMC)

The area archaeologists will concentrate on first stretches along University Drive, from East University Drive along Lakeland Drive, near the St. Dominic Hospital’s property line.

“The project will work its way southward toward Central University Drive,” Didlake said.

Originally named the Mississippi State Lunatic Asylum, the institution served about 30,000 patients between 1855 and 1935. The thousands of residents who died were buried with wooden markers which deteriorated and disappeared over time.

A list of asylum patients who were buried in the cemetery between 1912 and 1935 is available; but, without markers, no one knows exactly where each one lies.

In July, Mack and Gibson held a virtual seminar to inform UMMC employees about the archaeological work funded, so far, by $3.7 million from the State Legislature. In addressing some misconceptions, they said:

Removal of trees on a section of the UMMC campus has been necessary so excavations can proceed in the Asylum Hill Project. (UMMC)

“As we excavate, we are also looking at coffin materials, personal items such as buttons and pins,” Mack said during the presentation. “They will be documented; each item could potentially help narrow down a burial date, and could therefore help with identification.” Archaeologists will also record the size and location of each grave.

They will gather osteo-biographical sketches as well: age, sex, ancestry, height, past illness, trauma, etc. Such details can help whittle down the list of candidates for potential identification.

“This will allow is to tell a person’s story,” Mack said. “Even if no name is found, we can rescue the individual from the anonymity imposed by the grave.”

Descendants of asylum residents frequently ask about the possibility of identification through DNA. DNA analysis is sometimes impossible because of degradation, Mack said. “That’s why we will focus on presumptive identification.

“We are having conversations with DNA specialists who are interested in helping us identify individuals, if possible, and returning them to their families.”

Gibson has been in contact with about 150 descendants of patients. They have been kept abreast of Asylum Hill’s progress and have been invited to participate in virtual question-and-answer sessions about the excavations and to contribute oral histories and other information.

Why would a family not claim a body? Transportation and communication were issues, Mack said. Documentation shows that hospital officials tried to contact families, but there was no refrigeration then. So, they were buried, if not claimed, within 24 hours. They had to be interred on site, she said.

So far, 66 graves have been excavated – those uncovered after construction crew discovered a single pine coffin a decade ago. Archaeologists at Mississippi State University analyzed those remains.

It may take five to seven years to disinter and analyze the remaining thousands and accomplish other aims. Another goal, when funding becomes available, is to create a memorial and laboratory that will serve as a permanent resting place for those who could not be positively identified and returned to their families for reburial.

An archaeological field school for interested college students may also be in the works for next summer. UMMC students have already contributed their labor; among them are two medical students, Ruth Brooks and Katie Weeks, who volunteered to transcribe asylum records, such as yearly reports to state legislators.

Hospital records are held by the Mississippi State Department of Archives and History, one of Asylum Hill’s many stakeholders. Others include Native Americans. “We are exploring the possibility that Native American graves are present, as we work with the MDAH and the Choctaw Nations,” Mack said.

Those buried represent every county in the state; at least half are African Americans, Mack said.

“We continue to work with a community advisory board, answering people’s questions about their ancestors. This process truly serves the people all over Mississippi.”