You CAVE people need to stop it

The day “the call” came in, Angie and Sam Anderson were on their way home from riding horses. They had four grown children and were looking forward to their youngest’s upcoming high school graduation. With all of their children practically raised, they would finally have more time to spend together doing all of the outdoor activities they both love.

But then, the phone rang.

It was someone calling to tell the Andersons that one of Sam’s relatives was pregnant. This particular relative was a drug addict with no desire to get clean. She knew that Child Protective Services would take the baby, and the caller knew that Angie and Sam were likely the only hope the baby would have to end up with family.

For Angie and Sam, there wasn’t even a question to be asked. Baby Woods going home from the hospital
(with permission)

Of course, they wanted the baby. They never even hesitated and began making plans to start parenting all over again.

The decision was an easy one for the entire family. When Angie broached the subject with her 17-year-old son, his first question was, “When do we get the baby?” Although the decision was an easy one for the Andersons, the process would prove to be anything but.

Angie said she learned a lot in the following months.

Being unfamiliar with drugs, she educated herself on the effects of drugs on babies born addicted, and she reached out to many resources trying to figure out the best plan to make sure the baby would have the best chance of living a normal, safe and healthy life.

Angie knew that prenatal care was of the utmost importance, but finding the biological mother was difficult.

She was in and out of jail and always on the run from police. She was certain that if she went to the doctor, she would be arrested or forced into rehab. She was adamant that she wouldn’t be doing either.

Angie was finally able to get the biological mother to go get a sonogram, and they learned it would be a baby boy. Angie and Sam began buying everything they knew they’d need to start their family over and give the baby boy a chance at a good life.

However, weeks passed with no word from the biological mother. Angie said she couldn’t quit thinking of all the terrible stories she heard concerning babies in similar situations.

Angie and Sam spent those weeks just praying to God to protect the innocent, unborn little boy their family had already grown to love.

Finally, one afternoon while preparing deer meat to store for the upcoming year, Angie got the phone call she’d been praying for. She was told where the biological mother had been staying, and immediately went to get her.

Angie said the next several hours were some of the most emotional hours of her life, as she was blessed to be there from the minute of hospital admission through the delivery (which she got to cut the cord) to the baby being discharged from CPS care immediately into hers.

The Anderson family had just grown to include their sixth child. They named the baby Alexander Woods. Alexander is Sam’s grandfather’s name and they call him “Woods”, a tribute to the outdoors their family loves.

The next year and a half would be filled with the family learning even more about the ins and outs of dealing with Child Protective Services, including meetings, home inspections, and legal obligations the Sam and Angie had never before imagined facing.

However, they were thrilled and thankful to God when they were finally able to finalize their son’s adoption and officially, legally call him their own.

Several months passed with the whole Anderson family embracing their newest member when they received “the second call”.

Woods’ biological mother was pregnant again, still unwilling to try to get off drugs, and wondered if the Andersons were again interested in expanding their family. 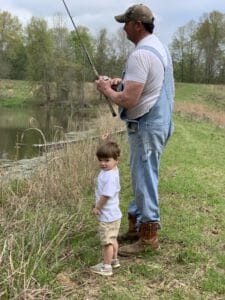 The months leading up to the second baby were filled with the same anxiety as the first time. Angie had a hard time finding the biological mother to get her to go for any prenatal care. Even worse, she had begun hearing rumors about the biological mother leaving the state to flee authorities and selling the newborn to strangers. Again, she and Sam put their faith in God and prayed.

And again, God answered their prayers when the biological mother called to say she was in labor. Again, Angie was able to be there for the delivery and again, CPS discharged the second baby to the Andersons.

Angie said she wouldn’t change a thing about the babies, but she had researched enough to know that because they were both born addicted yet otherwise healthy, the children could have future cognitive, behavioral and emotional problems.

During all of this, Angie not only learned a lot about the process the state requires to become licensed foster parents and the legalities of adoption, she also learned about the sad repercussions of addiction.

In her true loving way, Angie had sympathy for the young girls that have had their lives destroyed by drug use and addiction. She and her husband went so far as to offer their camper and even a room in their home and invited her children’s biological mother the chance to stay with them to get clean and on her feet.

The woman refused. The pull of her addiction is just too strong for her.

The Anderson’s story is far from over, however. During the adoption process (they are currently waiting on the finalization of the second adoption), another family tragedy involving drugs occurred.

A relative of the Andersons shot and killed Sam’s mother, largely in part because of drug addiction. He is currently in jail on murder charges, and wasn’t there for the delivery of his own child on May 20th. The young biological mother in this case is also an addict and yet another baby was born addicted to meth.

Sam and Angie’s foster parent status would come to be needed again as another innocent life was born affected by drugs.

In addition to taking care of the 2-year-old and a 4-year-old newest members of their family, they are also fostering the newborn.

Angie is unsure of what the future holds for the newest baby, as the biological mother in this case is only 19-years-old. Angie said she has been doing drugs for many years, but this young mother is currently in rehab. The Andersons are supportive of her and have hope she can stay clean and rebuild her life.

“It’s just heartbreaking to me because I’m not sure what kind of life she will come out of rehab to. We pray a lot for her,” Angie said.

Despite the unknowns her two youngest children face because of their biological mother’s drug use, Angie is not resentful.

“I’m blessed that we were able to get them. Our whole family loves them so much. They’re our children now, and as a family we are prepared to support and love them through any obstacles they’ll need to overcome. I just wish I could help find some way to help these young addicts. I’d like to see there be a place they can go and get their lives together and have a decent chance at staying clean. None of them were kids who dreamed of growing up to have their lives destroyed by drugs. It breaks my heart for them.”

Angie said she isn’t opposed to her children meeting their biological mothers in the future. She wants the best for them, and other members of the babies’ biological families are committed to being involved and supporting the Andersons’ decisions. There have been regular phone calls and some visits.

We may not be sure of what the future holds for any of these innocents, but we can take comfort in knowing that there are people like Sam and Angie Anderson out there willing to make it the brightest future possible. Buff Harris, the man who continues to keep Vicksburg healthy