The remarkable life of Ben Montgomery

Ralph Dowe, 1928 - 2022
This pastel portrait, made from a photograph of Ben Montgomery, is in the Black History display in the Old Court House Museum. The portrait is by Mary Helen Sims.

Benjamin Montgomery was one of the most exceptional men in Warren County history. Though born a slave, his achievements are phenomenal.

He was born in Loudon County, Virginia, in 1819, and when he was 17, he was sent overland to the slave market in Natchez. Despite the horrors of slavery, he was fortunate in that he was bought by Joseph Emory Davis of Warren County (older brother to future Confederate president Jefferson Davis) though he could not have realized it at the time.

Bitterly resentful that he had been taken from a city environment to an isolated plantation in Mississippi; he ran away but was soon apprehended and returned to Hurricane Plantation at Davis Bend.

Joe Davis didn’t punish the youth but instead talked with him about the reasons for his unhappiness. The late Janet Sharp Herman, historian and professor of history at the University of California at Berkley, felt that Davis saw in Ben Montgomery the exceptional potential he possessed. He explained to the young man the many opportunities before him and issued a challenge.

In later years, Montgomery’s son Isiah wrote that master and slave “reached a mutual understanding through their long and eventful connection.”

Ben Montgomery made the most of his situation. He could read, and he had access to the plantation library and was soon copying letters and legal briefs as office clerk for his master, who was an attorney.

He learned land surveying and construction plans for levees, essential to protecting to the plantation during floods. (The levees he designed are still holding today.)

He drew plans for several plantation buildings and was the architect for the garden cottage, or library.

Ben Montgomery designed the garden cottage, which became known as the library on Hurricane plantation. This photo, with many of Joe Davis’ slaves in front of the building, is from the Old Court House Museum collection and was taken ca. 1860.

He became an accomplished mechanic who kept the steam engines that operated the cotton gins running, and he invented a boat propeller to improve the paddle wheels of river steamboats. (Ironically, he could not claim a patent under United States law, but he was granted a patent under Confederate States law.) Joe Davis wrote his brother Jeff that Montgomery had “few Superiors as a Machinist.”

Montgomery was multitalented, and he also proved his ability as a merchant. Slaves on some plantations were allowed to do extra work to earn money, and Montgomery had saved enough so that in 1842 he established a store at Hurricane, selling dry goods and staple items to other slaves, bartering for wood, chickens, eggs and vegetables they had produced on their own time.

He maintained his own line of credit with New Orleans wholesale markets. He provided fresh produce and fruit for steamboats. The store proved popular with both black and white residents, and one lady from the mansion bought as much as $1,000 worth of goods in a year.

Montgomery became an agent for his master, buying supplies and shipping the cotton crop. Davis eventually named him business agent for Hurricane.

At Christmas in 1840, Montgomery married Mary Lewis, daughter of the plantation’s skilled millwright. He was 21, and she was 18. He had built a riverfront store, and his income was such that he was able to pay Joe Davis the equivalent of her worth as a servant, so Mary was able to stay at home and rear the four children they eventually had. She did some sewing for white women in the community and helped Ben in the store.

Davis always encouraged Montgomery to undertake new challenges, and the two often sat in the evenings and discussed the books they were reading, usually books of political theory and philosophy. 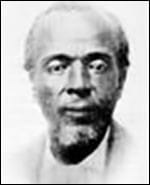 The secession of the Southern states and the ensuing war changed all this forever, but it did not destroy the friendship between the two men. Davis took most of his slaves to Hinds County and then to Alabama to escape the ravages of war, but Ben Montgomery stayed behind to try to guard both Hurricane and Brierfield plantations as best he could. Despite his efforts, Yankee soldiers burned Hurricane mansion. He remained on the plantation, and in 1863 wrote to President Davis of the situation. After the fall of Vicksburg, he took his family to safety in Ohio.

After the war, Montgomery returned to Warren County, but it was hardly the home he had known, for the Davis plantations had been confiscated by the Yankees and were being used as headquarters for the Freedmen’s Bureau. Joe Davis and Ben Montgomery worked together to successfully rid the Bureau of its commander.

In 1867 Montgomery took on a new responsibility when the commander of the military government named him justice of the peace for Davis Bend. With genuine humility, he said he felt unqualified for the job, but he felt it was his duty to accept.

On Dec. 31, 1874, he was helping demolish an old building on Hurricane when a wall collapsed, falling on him. It broke a rib, and his spine and hips were so badly injured that he could not walk for months. Dr. Charles Mitchell, Joe Davis’ son-in-law, treated him, but he was terribly racked with pain and never really recovered.

He died at age 58 on May 12, 1877, and the next day a metal casket costing $75 was bought for him from John Quincy Arnold in Vicksburg. He is probably buried on Davis Island, but his grave has no marker.

He should be remembered for many reasons, but mainly because he was the first black person to hold public office in Mississippi and possibly in the South.

If Warren County had a hall of fame, Ben Montgomery’s name should be in it.

Gordon Cotton is the curator emeritus of the Old Court House Museum. He is the author of several books and is a renowned historian.

Those who keep us safe: Shane Miller