Bolton man arrested for possession of methamphetamine and cocaine 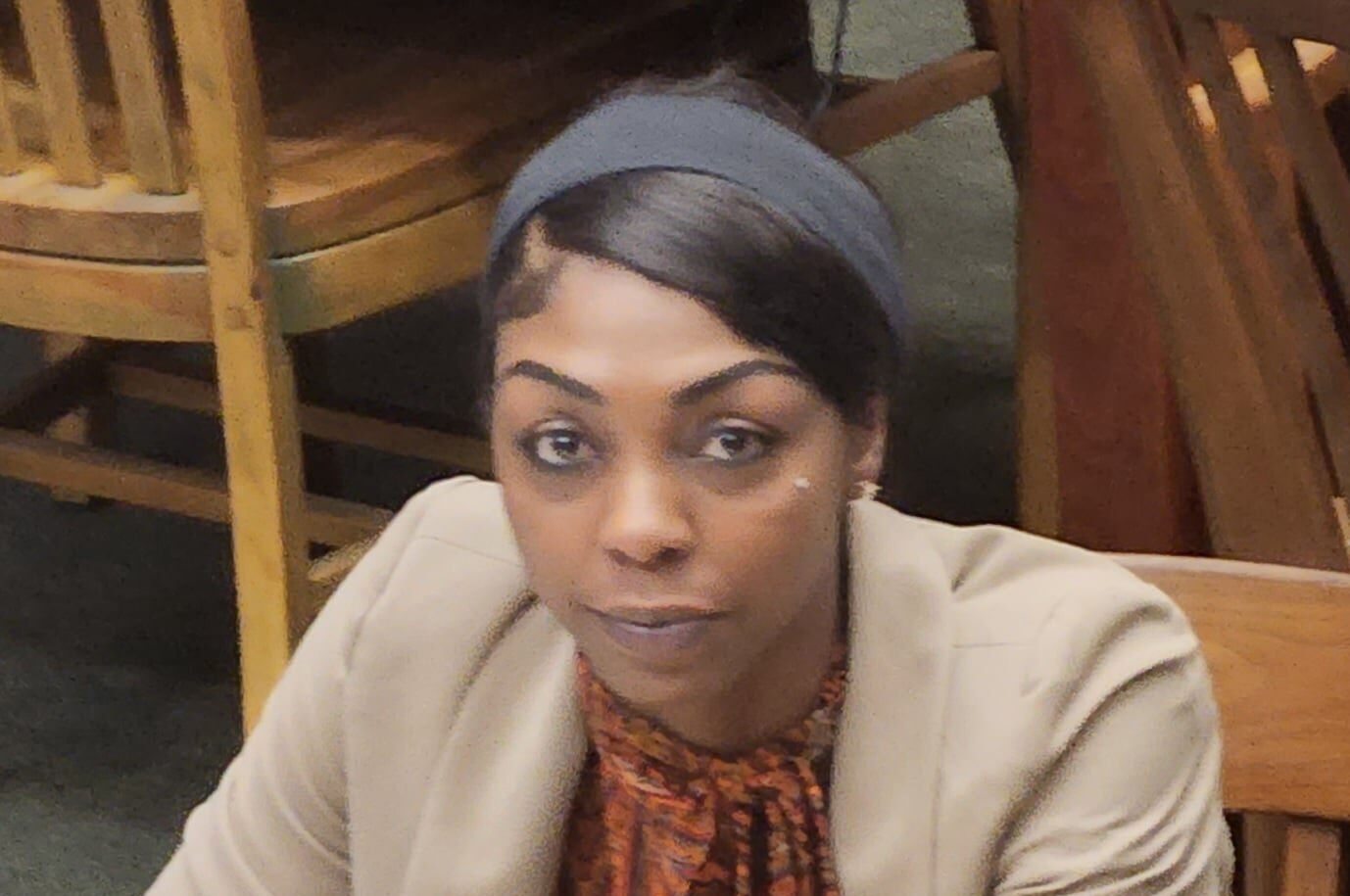 Talisha Butler sits in court during her trial. (Photo by David Day)

Following several days of testimony, a jury found Talisha Butler guilty of heat of passion manslaughter in the death of Christopher Johnson.

Butler and Johnson had a passionate relationship which Butler ended in early 2020. On July 15, 2020, Butler shot Johnson in the chest.

The shooting happened at 5:30 p.m. on July 15, 2020, in the parking lot behind Boston Fish Supreme on Clay Street. Most everyone agrees Butler shot Johnson when he turned towards her after or during a fight with his sister, Brianna. Aldrick Sykes tried to break up the fight between the siblings and was pulling the sister away when the shot was fired. Butler was about 6 feet away, according to the videotape and the testimony of the medical examiner. The medical examiner, Dr. Mark Levaughn, stated the bullet passed through the lung and the aorta causing Chris to bleed out quickly. After he was shot, Johnson got a foot inside the car but collapsed at the door of the vehicle.

A security videotape from Sullivan’s Grocery recorded the entire event.

Butler had terminated their relationship several months before the shooting. According to Butler and several of the witnesses for the prosecution and the defense, their relationship was abusive with one witness saying they gave it to each other. One witness stated Johnson would call Butler “… up to 180 times a day.” According to Butler, Johnson was possessive and obsessed with her and was not going to let her go. Several witnesses, including witnesses for the prosecution, testified that Johnson was violent and controlling with Butler.

Butler was also under a court order to not go near Johnson. The prosecution was able to enter into evidence that Butler had two prior domestic violence charges from a relationship several years ago.

Regardless, neither the defense nor the prosecution challenged that Butler was in the parking lot when Johnson pulled up and that Johnson had a restraining order to stay away from Butler.

A fight between brother and sister

When Johnson pulled up, Butler got out of the car with a gun. According to one version introduced into testimony, Johnson was taunting Butler by saying she wasn’t going to do anything with that gun. Another version says Butler was leaning on the hood of her car, some 6 to 10 feet from Johnson, and taunting him while pointing the gun at him. Brianna Johnson came out of the barber shop and she and Christopher Johnson began to fight. Sykes got out of the car he was in with Butler to break up the fight between the two siblings.

At some point as the fight was ending or had slowed down, Christopher Johnson turned to Butler and, according to Butler’s testimony, “gave me that look.” Butler responded to that look by attempting to shoot Johnson with the Smith and Wesson 9 mm. When she attempted to shoot, the gun didn’t work because the magazine wasn’t properly loaded into the gun. According to the prosecution, the video shows Butler dropped the magazine, had to bend down and pick it up and then load it into the gun before then shooting Christopher Johnson. Three unspent shell casings were found at the front of Butler’s car.

“I got scared and shot,” Butler later stated.

After the shooting Butler fled the scene, but soon thereafter contacted law enforcement and turned herself in. She was immediately interrogated by Investigator Tillman Clifton with the Vicksburg Police Department. In that interrogation, Butler admitted to shooting Johnson.

The story doesn’t match up

Butler also told Clifton several things related to the shooting that turned out to not be true. The prosecution used those inaccuracies to their advantage.

Butler, on the stand, later explained those discrepancies and said she was in shock during the interrogation and was trying to protect her friends who were there with her. One thought they had outstanding warrants and Butler didn’t want to get anyone else in trouble. Regardless, Butler told several lies in her explanation to the police of what happened and each of those lies was clarified, in detail, to the jury.

At no time during any of her testimony did Butler ever say Johnson attacked her on the day of the shooting. She even stated she had not seen Johnson for some time prior to that day. The family of Chris Johnson said, under oath, that Johnson was getting counseling and “working on himself.” Brianna Johnson said on the stand, under oath, after being asked directly by the prosecution, that Butler did not need to shoot Chris Johnson.

The defense presented several witnesses, all of whom stated Butler was a victim of domestic abuse. They alleged several incidents of the abuse and went into detail. The prosecution countered that no police reports were filed and Christopher Johnson was never taken in for parole violations as a result of the alleged abuses.

On Thursday morning, the prosecution began their closing arguments. The prosecution detailed the trial and reminded jurors of each item presented in evidence. The defense presented an emotional appeal to the jury that they try to understand the mind of an abused woman who defended herself from her abuser.

There is a verdict

The jury was out for two-and-a-half hours before it was announced there was a verdict. Once all the parties were convened, the verdict was given to the court and read aloud:

Prior to going into the discussion, the jury was read Jury Instruction No,: S-6 by Judge Chaney as one of the many options of how they could decide this case. “Heat of passion” as defined by the court is:

Heat of passion as used in other instructions of this Court is a state of violent and uncontrollable rage engendered by a blow or certain other provocation given, which will reduce a homicide from the grade of murder to that of manslaughter. Passion or anger suddenly aroused at the time by some immediate and reasonable provocation, by words or acts of one at the time. The term includes an emotional state of mind characterized by anger, rage, hatred, furious resentment or terror.

When the verdict was read, Butler looked shocked and seemed to stop breathing for a few seconds. Butler’s family, who was in the courtroom, could be heard sobbing. That sobbing increased to the point one family member became physically ill. Johnson’s family remained largely silent, but a verbal back and forth was had for a couple of seconds before the deputies and officers in the rooms silenced everyone. Judge Chaney orchestrated an orderly exit from the courtroom of the prosecution, the families and then, lastly, himself.

“It is better I walk out of here”

Before everyone left, Butler was gently led from the courtroom by Lt. Vincent Woods. As she was leaving she turned to her family and said, “It’s okay. It’s okay. It is better I walk out of here than they carry me out in a box.”

Talisha Butler as she turned to her family and said, “It’s okay. It’s okay. It is better I walk out of here than they carry me out in a box.” Photo by David Day

See a typo? Report it here.