Those Who Keep Us Safe: Hunter Anderson

When I learned Hunter Anderson would be the focus of this week’s Those Who Keep Us Safe column, my first thought was Yay! Easy week! After all, I’ve known Hunter literally all of his life. His mother is a literal life-long friend of mine, and I remember when Hunter was born. 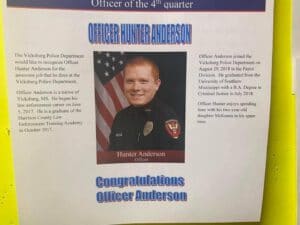 Anderson was recognized as Officer of the Quarter (Courtesy of H. Anderson)

Surely it would be a snap to get Hunter to tell me all about his accomplishments and why he is such an amazing patrolman with the Vicksburg Police Department.

Once again, I was very wrong.

I suppose I should’ve known the shy, red-haired kid that wowed in the water with the Vicksburg Swim Association had grown up to become the humble, red-haired adult that wows on the streets of Vicksburg. 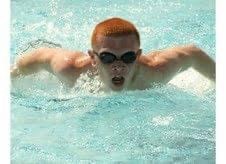 We had no problem with the basic questions. Hunter Anderson graduated from Warren Central in 2013, graduated from the Harrison County Law Enforcement Training academy in 2017, and finished his degree at the University of Southern Mississippi in 2018.

He told how he always felt like this career was a calling. He’s always been interested in law enforcement but was never satisfied until becoming involved.

He said the most rewarding part of his job is getting to know people around the community and helping people in times of crisis.

He offered advice for anyone interested in law enforcement, saying, “I would tell anybody who wants a career in law enforcement to go for it. This job is very rewarding when you get to help people. It is good to be a people person, but even if you aren’t, this job will certainly change that.”

And Hunter was very willing to share his love for his wife, Halle, and his beautiful little girl, McKenna. 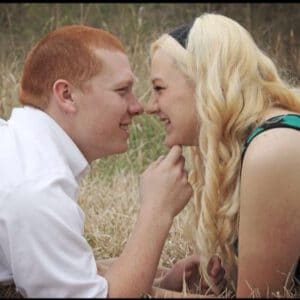 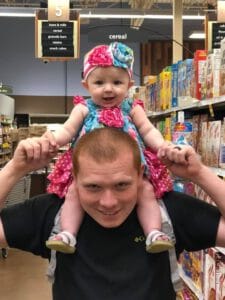 What Hunter didn’t tell me was about the incident in November of 2020 when he was injured on duty. Hunter was determined to get a drunk driver off the streets at the expense of his own safety. The driver attempted to flee and Hunter received lacerations to the head that required emergency medical care.

Hunter didn’t share with me that he was awarded Officer of the Quarter with the VPD.

He didn’t tell me about all the times he went above and beyond to help motorists that were stranded on the side of the road.

He didn’t tell me about the time he was off-duty but still stopped to help a stranded mother and baby.

He kept the fact that he took his personal time and personal money to buy a car battery for a young mother when hers had died and she had no way of repaying him.

He failed to mention the other officers he has trained and the young people he has taken the time to encourage when he’s seen they’re on the wrong path.

I knew Hunter as a quiet, redheaded little boy with incredible manners and a heart of gold. I knew him as the kind of kid you could count on to quietly do the right thing even when nobody was looking.

I should’ve known that the kid I knew had grown up to be a man with the same incredible character and soft-spoken, but gigantic heart.

Briggs needs your help homing a litter of kittens

VIDEO: Ruby Thomas celebrates her birthday with a parade