Those who keep us safe: Jazmine Carter

Jazmine Carter is one of Vicksburg’s newest firefighters with the Vicksburg Fire Department. Her first official day of training began Dec. 2, 2020.

The 26-year-old Vicksburg native never believed she would be a part of public service until recently.

No one in Carter’s immediate family has had a career in public safety, but no one in her family blinked when she wanted to give it a try.

“I love being different, and my family knows that, so it wasn’t a shock to them that I wanted to do this,” she said.

Carter is one of a very few women to ever hold the position as a firefighter for the department, but even at a petite 5-feet-2-inches, she is up for the challenge.

“I’m used to being the only girl. I grew up with nothing but boy cousins,” she said. “I don’t want the guys at the department to tiptoe around me because I’m ready; I was raised a tomboy.”

Carter says when she is on the job, she doesn’t see gender.

“I just feel like one of them,” she said.

She is only aware of one other female firefighter currently serving with the department, Michele Felberg.

“Michele is a beast,” Carter said. “I really look up to her. She’s amazing. She is really great at what she does.”

Being with the department for less than a month, Carter still has many things to learn, but she already has a few favorite things.

“I love hearing a call come in,” she said. “It gives me so much adrenaline. I’m a newbie, and I have to remember to stay calm.” 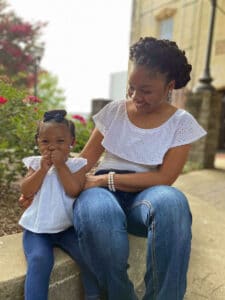 She said when a call comes in, she springs up, and her heart begins to race.

“The veterans get up in a calm manner, in a hurry but still slow, I just keep telling myself, ‘Just chill Jaz.’”

Carter said the other thing she has noticed right away is the closeness of the firefighters.

“I love that we are all a big family and look after each other,” she said. “On a call, they will say, ‘You good, Jaz?’ and I love that. We really are like brothers and sisters.”

She serves on A-shift, which means she works 24 hours on call and then has 48 hours off. Carter is a single mom to a 2-year-old little girl, Ava K. James, but she has an amazing support team to help her balance her work and family life.

“Her dad and her godparents really help out a lot,” Carter said.

She said even though she is no longer together with Ava’s father, they get along and really work well to give Ava the best life.

Even though joining the fire department was an impromptu decision, Carter’s enthusiasm has always been to help people.

“I’m passionate about helping people,” she said. “It goes way beyond just fire service. I help people in every aspect of my life and give 100% to help anyone.”

See a typo? Report it here.
Related Topics:FeaturedTWKUS
Up Next