Those who keep us safe: Lamar Frederick

Two local firefighters recognized for their years of service

The love of a hit television show led to a 26-year career in firefighting for Fire Chief Lamar Frederick.

“I was always into the show ‘911’,” Frederick said, “and I always thought about joining the fire department. A guy that worked on the fire department actually lived down the hill from me, and he kept asking me to join. I finally went and joined and have loved every minute since then.”

Frederick serves as one of six chiefs on the Warren County Volunteer Fire Department. He joined the department as a firefighter in 2011 and became chief at the Culkin Fire Department in 2012.

“No fire is the same, and no call is the same. You have to be trained for each one,” Fredrick said. 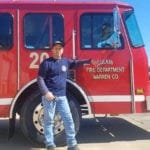 Prior to serving in Vicksburg, the Mississippi Gulf Coast native served 17 years at the Harrison County Fire Department. Frederick’s wife led him to the River City after accepting a job with a local casino. Combined, the couple have three children and five grandchildren.

In Harrison County, Frederick served as chief of the department for three years, and he was at the heart of the first response to Hurricane Katrina in August 2005.

“After being through Katrina, I learned a lot,” Frederick said. “Just being able to be out there protecting the community was my passion.”

“The fire coordinator wanted me in the (emergency operations center) to help run things in my area,” he added. “This was hard for me because I’m an outside-in-the-field kind of guy. I can’t be behind walls while everything is going on.”

In such a lengthy career, Frederick has seen and been a part of heartbreaking times and experienced trauma. Luckily, there is a post-traumatic team in place for firefighters to talk with after major accidents, but many firefighters, like Frederick, find comfort and rely on the support of fellow firefighters.

“We have people we can talk to after major incidents happen,” Frederick said. “The post-traumatic people are there to talk to, but a lot of us have our own way of dealing with it. I communicate with other firefighters and joke around with them.”

Firefighters can go through many emotions on each and every shift.

“You can’t keep all that stuff bottled up inside,” he said. “It has to come out sometime.

“A lot of people think being on the fire department is all about the fun and the glory, but it’s not about that,” Frederick said. “Being on a volunteer department, like this, you have to have heart to do it.”

Frederick urges everyone to consider joining the Warren County Fire Department. Applicants must clear a drug test and background check, and then the application must be approved by the chiefs.

“When I first joined, I thought it was all about the fun and glory, too,” he said, “and I thought, ‘maybe someday I can be a hero’.”

Now, Frederick does not look at it like that.

“It’s not the fun. It’s not the glory,” he said. “It’s just serving my community and being able to protect them.”

“Those who keep us safe” is a series profiling people in Vicksburg and Warren County whose work contributes to our safety, whether on the front lines, in the back office or in positions of leadership in organizations dedicated to serving the community in times of danger and crises. Nominate someone for the series by sending an email to [email protected]om, letting us know why the community should know about him or her.