Good News People Those who keep us safe

Those who keep us safe: Shane Miller

Neighbors helping neighbors, it's what we do

Twenty-eight years have flown by for Shane Miller, but the memories of doing what he was called to do will last a lifetime.

Capt. Shane Miller is making plans to retire from the Vicksburg Fire Department this month, but his legacy will live on through the men and women he serves with each day.

“I love it here,” Miller said. “This job has just been wonderful. You meet so many people. The men and women that work in this department are the best in the world.”

Miller felt called to be a firefighter by his father who served on the volunteer fire department in Miller’s hometown of Rolling Fork, Mississippi.

“Rolling Fork is a small town and only has a volunteer department,” Miller said, “and I would go up there when he would do things and kinda got interested in it. As a kid, I would see him drive the fire truck and fell in love with it; I fell in love with helping people.”

Although firefighting was in his blood, Miller got a degree from Hinds Community College in auto body and frame repair. Throughout school and after graduation, Miller worked with the volunteer Rolling Fork Fire Department, but in 1992 that would come to an end.

“Another volunteer fireman in Rolling Fork said, ‘Vicksburg is about to start hiring. We need to get on over there.’ We worked out and took the test, and I was officially hired by the Vicksburg Fire Department at age 22,” Miller said.

With 28 years of service under his belt, Miller looks back with fondness for what he learned over the years.

“There have been so many people to come through this department that have made an impression on me, ” Miller said. “In my young career, so many guys taught me a lot about fighting fires, but (they) taught me even more about being a leader and being a man. You grow up here.”

In August 2002, Miller was named captain of Shift A. Like many fire departments, Vicksburg firefighters work 24/48 schedules, meaning they’re on call for 24 hours, then off for 48 hours. With three shifts, the schedule allows the department to have firefighters on duty and ready to go at all times.

“I think it is pretty neat that I started my career on Shift A and will retire from Shift A, ” Miller said with a laugh.

“People don’t realize how much you give up being here,” he added, “but it’s all for a wonderful purpose.”

A few of Miller’s duties as captain are to manage the station and serve as an officer on the firetruck and on the scene of a fire. It is also the captain’s job to survey the scene when they arrive at a call and make decisions about how to best fight a fire.

Miller, 50, is married with two adult daughters and one grandson.

“This job is all my children and wife have ever known me to have,” Miller said. “My girls are awesome, and my little grandson, oh my gosh, I could talk about him all day.”

It is his family and community that make the job worth doing.

“Vicksburg isn’t that big, so we often help people we know and family members,” Miller said. “There is not one scene we pull up on that myself or one of my guys on shift (don’t) know someone involved. The people we are helping aren’t generally strangers—they are our neighbors.”

Miller mentioned that seeing those he has helped in town makes him smile, knowing he made a true difference in their life.

“It’s sad to see a house fire, but I love to see those people recover and doing good later on,” Miller said. “To me, that is so special and rewarding.” 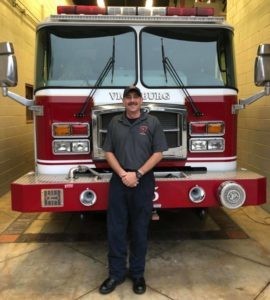 Shane Miller (photo by Kami May)

As Miller’s nearly three-decade career comes to an end with the Vicksburg Fire Department, he will cherish memories of the fire station the most.

“It makes it harder because I’m leaving my friends,” Miller said as he fought back tears. “We’ve had some horrible days here. We’ve all cried together, and we’ve had some really good days and done some fun things together. We always are coming up with some antics at the firehouse, and you have to do that to cope with the things we do and see each shift.”

Although Miller’s last shift is fast approaching, he will not be hitting the golf course just yet. He has accepted a new job as a shift supervisor with Industrial Emergency Service for the Continental Tire Plant in Hinds County. The plant will have a small three-bay fire station on site to provide firefighting, emergency medical and rescue services.

The Vicksburg Fire Department will honor Capt. Miller in a badge presentation on Friday, Feb. 14, at the Central Fire Station on Walnut Street at 2 p.m. The event is open to the public.

“The presentation will be hard. I turned my retirement notice in to some of my best friends. We’ve seen each other’s kids grow up. We’ve seen marriages, graduations, grand-kids,” Miller said, his voice trailing off. “You tend to learn a lot about people when you work in this environment and live together every third day.

“Retirement will be a bittersweet moment, but I look forward to the next step.”

“Those who keep us safe” is a series profiling people in Vicksburg and Warren County whose work contributes to our safety, whether on the front lines, in the back office or in positions of leadership in organizations dedicated to serving the community in times of danger and crises. Nominate someone for the series by sending an email to [email protected], letting us know why the community should know about him or her.

The remarkable life of Ben Montgomery