A Vicksburg resident was taken into custody on Thursday after being seen with a handgun on a Warren County school pick up line.

Warren County Sheriff Martin Pace reported that city and county law enforcement worked together to apprehend the driver of a 2018 Honda sedan who was seen with a weapon while picking up his children in a school pick up line. The vehicle and license were reported to law enforcement. 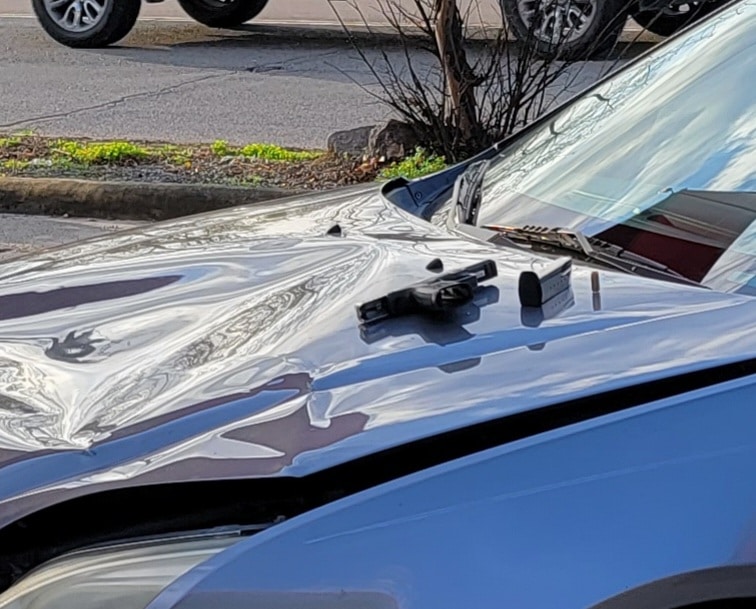 The weapon on the hood of the car. There were children and potentially drug related items also in the car. (Photo by David Day)

An alert Vicksburg Police officer, David-7, Dane Davenport, soon spotted the vehicle on North Washington and executed a stop. The vehicle was ordered into the lot of the Klondyke at 100 North Washington. When Davenport approached the vehicle he noticed the weapon and was able to seize it and arrest the driver without further incident.

The vehicle was impounded and later searched. The search revealed several items which Warren County Sheriff Martin Pace says appeared to be narcotics related. The items have been sent to the crime lab for testing.

Tramorris Galvin, 27, of Vicksburg, was charged with a felony for taking a firearm onto a school property. Judge Ed Woods issued a bond of $10,000.

Galvin posted bond and was released on Friday.

Child Protective Services were called to the Klondyke to file a report since there were three children in the backseat of the car.

City and county law enforcement at the Klondyke on N. Washington. (Photo by David Day)

Domestic dispute leads to gunfire in Warren County, suspect on the run