Turnout was low in Warren County for the primary elections yesterday. In one hotly contested race, the margin of victory was only 11 votes.

The most closely watched races were for the five Warren County supervisor positions. All five districts have strong opponents, and voters sent one incumbent home.

In last night’s party primaries, three supervisor seats were contested by party challengers. In District 1, Ed Herring and Bill Jeffers vied for the position on the Republican ticket. Herring edged out Jeffers and will face incumbent John Arnold in November. 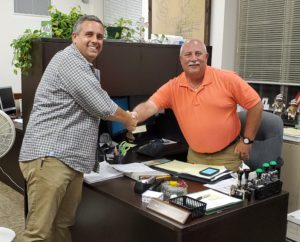 Ed Herring and Bill Jeffers share a friendly handshake after the results of their race were announced.

District 2 Democrat William Banks had no party challenger but will face two independents in November: Stan Collins and Willian Halpin.

District 3 was a hotly contested race between two well-known Democratic local names and a newcomer. Incumbent Charles Selmon faced a challenge by Vicksburg Warren School District board member Jim Stirgus Jr. and Shawn Jackson. Jackson defeated both in the primary, and will face Selmon in the August 27 runoff election, because in Mississippi, primaries winners must have a minimum of 50 percent of the vote plus one vote. Jackson edged out Selmon for the top spot by 11 votes, but neither reached the required 50+1. The winner of the runoff will face independent David Sharp in November.

District 5 has three independents who will face Republican primary winner Kelle Banks Barfield. Barfield managed to get 1,323 votes despite the low turnout.

Election officials along with party representatives work to accurately tally the wishes of the voters.

After the August 27 runoff to determine the District 3 supervisor candidate on the Democratic ticket, all eyes will be on settling the contested races on November 5 where the winners take all.

Warren County had no contested party races in the primaries for state House and Senate seats.

Updated Aug. 28 to correct Jeff Holland’s political affiliation. He is an independent, not a Democrat.

Related Topics:2019 electionsElectionFeatured
Up Next