The public library is going fine free for a year

Kansas City Railroad employees worked throughout the night and continue to work to clear the scene of the derailed train in Bovina, Warren County Sheriff Martin Pace told Vicksburg Daily News on Wednesday. The biggest impact of the situation is felt by Bovina residents that live south of Highway 80 and regularly take Bovina Drive to access the interstate.

Authorities are reluctant to speculate how long the clean-up effort will take, but it is ‘all hands on deck’ with multiple agencies working together around the clock to clear the scene.

At around 7:25 p.m. Tuesday, reports of a derailed train near Tiffentown Road and Bovina Drive began coming in to the 911 dispatchers.  Responders from Warren County Fire and Vicksburg Fire, including Vicksburg Fire Chief Craig Danczyk, Fire Coordinator Jerry Briggs, 410-Chief Chris Kennedy and 310-Chief Mitch Lange, as well as multiple Sheriff’s deputies and Master Sgt. Kerwin Stewart with MHP responded to the scene.

Seventeen train cars derailed at and around the Bovina Drive rail road crossing, taking down a power line and a transformer in the process. At least two of the cars were reported to be leaking an unknown substance, however MDEQ has assured local authorities that all chemicals are contained and do not pose a danger to the public. 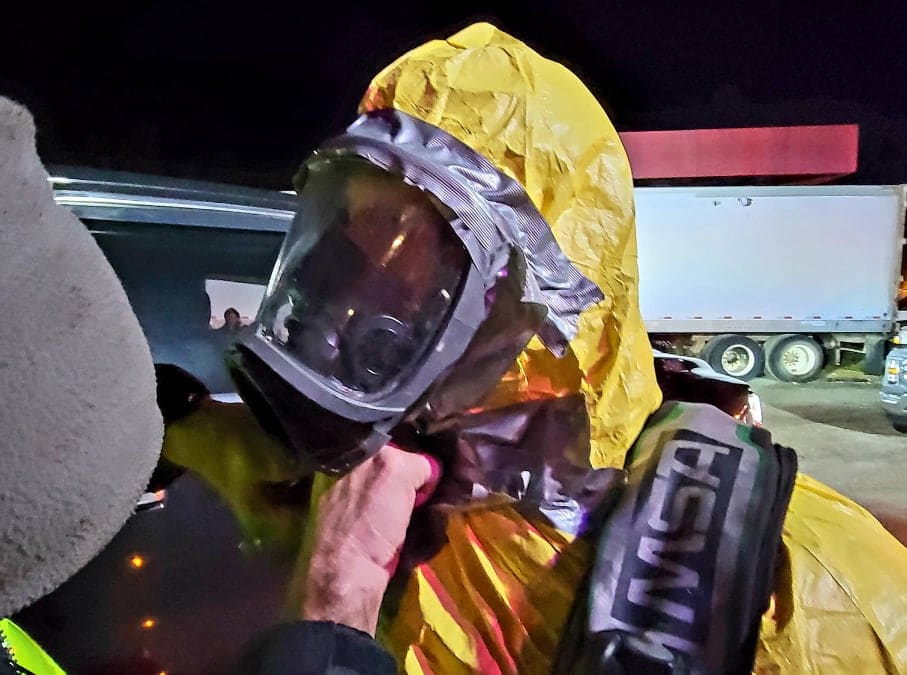 Bovina firefighter Zach Weber is being suited up in a hazmat suit to avoid contact with the substances leaking from the derailed train Tuesday night (photo by Jerry Briggs).

Many of the tanks on the train were carrying the highly corrosive substance sodium hydroxide, so authorities followed all precautions and protocols to ensure responders and the public at large remained safe.

Sheriff Pace stated he was later informed there was no reason to evacuate the area. The biggest impact to the area would be traffic for the “foreseeable future”.

Gratefulness is possible, even in a pandemic