A traffic stop turned into a low-speed pursuit on Monday after a woman managed to evade police custody.

Around 1:30 p.m. on Nov. 1 Vicksburg police officers stopped a 2006 Dodge Stratus near the Military Park on Clay Street for speeding.

The driver, Lakisa Thompson, of Vicksburg, began to become disorderly. Officers attempted to take Thompson into custody but Thompson allegedly resisted arrest and managed to escape into her vehicle and initiate a low-speed pursuit.

The chase took place from Clay Street to the Best Western Inn on North Frontage Road. Thompson stopped her vehicle and officers were able to take her into custody. 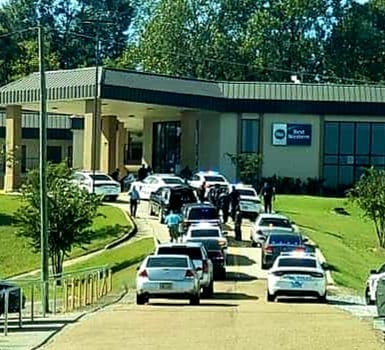 The chase ended at the Best Western Inn on North Frontage Road. (Photo by Jessica Berry)

Thompson is charged with speeding, no proof of insurance, disorderly conduct, resisting arrest and failure to yield to emergency vehicle. She will be held until her initial appearance in Vicksburg Municipal Court.

Three suspects in custody for shooting death of Edwards man